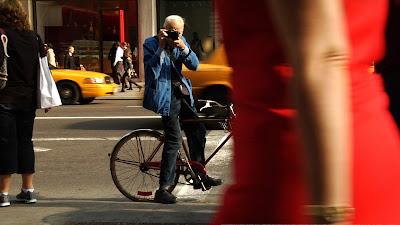 
Making a documentary about an irresistibly interesting subject seems like it might be tough to screw up. After all, how could a film about an 80-year-old man who cruises the streets of New York City on a Schwinn bicycle, dodges taxis and takes photographs of the fashion he sees not be utterly fascinating?

Bill Cunningham New York is nothing if not utterly fascinating, but getting there wasn’t quite so easy, as director Richard Press explains in a statement included with Zeitgeist’s DVD release of the film. It took eight years to convince Cunningham, who photographs and writes the “On the Street” and “Evening Hours” columns in The New York Times, to agree to be filmed, and even after he agreed, no consistent shooting schedule could be established. Rather, Press and his tiny crew would hang around Cunningham’s workplace with small, consumer-grade cameras, and wait for opportunities to shoot.

The small-scale nature of the production lends the film an undeniably intimate feel, as if we’re just hanging out with Cunningham, who might just be the sweetest, most delightful and most singularly focused man on the planet. Since the late ’70s, Cunningham has photographed fashion for the Times, and his commitment to pounding the pavement, keeping a sharp eye out and getting the shot no matter what it takes proves him to be a journalist of the highest order.

Press’s film captures Cunningham’s intense photographic concentration on busy Manhattan sidewalks, his playful relationship with co-workers at the Times and his quiet personal life, which almost no one has any details about, and Cunningham only talks about briefly. His life is one utterly devoted to fashion, but the intimidating, snooty and high-pressure connotations of that industry are the diametric opposite of Cunningham. Bill Cunningham New York shows him to be a large-hearted egalitarian, capturing the fashion impulses of anonymous pedestrians with as much interest and delight as those of renowned tastemakers.

Talking heads with fashion fixtures like Anna Wintour and Iris Apfel dot the film’s landscape, but Press wisely keeps the film’s gaze mostly fixed on Cunningham’s day-to-day routine — living amid rows of file cabinets in a Carnegie Hall studio apartment, attending high-class fashion events in New York and Paris and readily whipping out his Nikon film camera to capture a compelling outfit. The resulting portrait of this dedicated, generous and talented octogenarian is absorbing and immensely gratifying.

Zeitgeist’s DVD of the film includes 20 minutes of additional scenes and the film’s U.S. theatrical trailer. A booklet with Press’s director’s statement and reprints of two “On the Street” layouts is also included.