If.... — The Criterion Collection 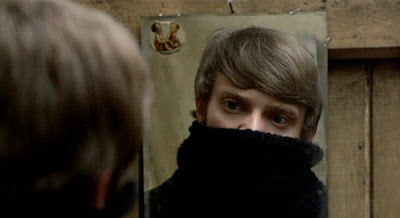 Article first published as Blu-ray Review: If.... — The Criterion Collection on Blogcritics.

The Film
Audacious doesn’t even begin to describe Lindsay Anderson’s If…., a brutal satire that pulls no punches in its attack on British society while simultaneously achieving daring acts of formal anarchy. Don’t be deceived — while If…. takes place inside a well-mannered public boarding school and features chapter-like section headings, this is no prim and proper picture of academia. Anderson casually flouts any cinematic notion of reality, with a nearly invisible membrane between real events and fantasy.

Malcolm McDowell, in a pre-Clockwork turn, stars as Mick Travis, a senior at a British boarding school that at first blush appears to have all the trappings of a strict, conservative institution. But the power structure there is perverse, and the sadism of the faculty pales in comparison to that of the Whips, a small group of fellow students who enact swift justice on any square pegs while indulging in their own decadent pleasures.

Travis, along with buddies Wallace (Richard Warwick) and Johnny (David Wood), rebels in his own small ways, but isn’t ever behind any grand mischievous schemes. Indeed, the most brutal punishment the group receives — a series of lashings inside the gymnasium — is given as a result of their “general attitude.”

And yet, If…. features a strikingly violent denouement, with Mick’s rage front and center. By this point, it seems clear we’ve drifted into the metaphorical territory of the imaginary, but what else up to that point also qualifies? Is the presence of a dark-haired, slyly seductive girl (Christine Noonan) also completely imagined? How much is Mick only a revolutionary in his own mind?

Anderson keeps viewers on their toes throughout, mixing color and black-and-white footage seemingly at random (originally employed for practical purposes) and playfully messing with structure without ever tipping his hand. But although If…. is no ordinary school film, its precise observations about group dynamics and carefully realized moments between characters (like an exquisite scene that codes blossoming romance through a gymnastics routine) make it one of the best of that genre.

The Blu-ray Disc
If…. is presented in 1080p high definition with an aspect ratio of 1.66:1. Footage both in color and black-and-white looks outstanding here, with strong sharpness, clarity and depth of detail. Fans of heavy, unadulterated grain structure will be very pleased with this transfer, which showcases lots of film-like grain, particularly during the color sequences. The colors themselves are fairly bold and always bright, and black-and-white scenes show excellent contrast and grayscale separation. All in all, this is a nice step-up from Criterion’s previous DVD release of the film.

Audio is presented in an uncompressed monaural soundtrack that features solid depth for a mono presentation. Voices are almost always clean and clear, with occasional moments that are harder to decipher, although accents are more to blame than anything.

Special Features
Criterion ports everything over from the DVD release, including an audio commentary by critic David Robinson and McDowell and Thursday’s Children, an Oscar-winning short documentary that Anderson co-directed about a school for deaf children.

Also on the disc is a 2003 episode of Scottish TV series Cast and Crew, which brought together cinematographer Miroslav Ondrícek, editor Ian Rakoff, director’s assistant Stephen Frears, producer Michael Medwin and screenwriter David Sherwin as well as pre-taped footage of McDowell to discuss the film. The interviewer asks a lot of unfocused questions, but the group provides lots of interesting bits of information.

Also included is an interview with the late actor Graham Crowden, who plays an eccentric history teacher in the film. Crowden is a really charming personality, and although he has some trouble organizing his thoughts, his recollections of working on the film and with Anderson are quite enjoyable.

The package also includes a booklet with an essay by critic David Ehrenstein, a piece by Sherwin about the script’s radical changes and a publicity piece in which Anderson interviews himself.

The Bottom Line
A brilliant movie that certainly rewards multiple viewings, If…. comes highly recommended.
Posted by Dusty at 9:15 AM