9 to 5: The Musical at the 5th Avenue Theatre 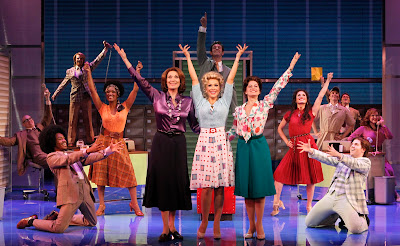 Article first published as Theater Review (Seattle): 9 to 5: The Musical by Dolly Parton and Patricia Resnick at the 5th Avenue Theatre on Blogcritics.

The national tour of 9 to 5: The Musical has a lot of things going for it — high energy numbers, impeccable choreography, and a trio of talented actresses each carving out a distinctive stage persona for herself. Whether that’s enough to overcome the strangely joyless tenor of the production probably requires devotion to the film that inspired it, to Dolly Parton herself, or some combination of the two.

Parton’s musical numbers are serviceably peppy, but the book by Patricia Resnick, who also co-wrote the film’s screenplay, is dispiritingly flabby. Flashes of screwball wit, workplace satire, and broad physical comedy pop up briefly, but the show never commits to a comedic style and mostly settles for corny set-ups (strait-laced office workers smoking pot, an unattractive assistant pining after her boss) with even worse punchlines.

This first tour, which began in September, is at the 5th Avenue Theatre through April 24. The musical largely follows the plotline of the film, with three underappreciated female office workers at the generic Consolidated Industries fighting back against the sexist regime that runs their company. Violet (Dee Hoty) is a capable, strong widow balancing career with raising a teenage son. Doralee (Diana DeGarmo) is a busty country girl, constantly being gazed upon by lascivious male coworkers. Judy (Mamie Parris) is newly single, and thrust into the working world without skills because of her husband leaving her for a 19-year-old.

The three are unlikely friends, but have a common enemy in their boss, Franklin Hart, Jr. (Joseph Mahowald), a bumbling, leering man who treats his female employees either like dirt or like potential sexual conquests. He has a seemingly insurmountable power over them, but a series of events just might give the women a chance to change the power structure at Consolidated.

The first act of 9 to 5 is a laborious affair, mostly filled with a series of “I am” songs that establish superficial details about the characters without propelling the musical into any interesting territory. The numbers are certainly bombastic, with the decent-sized ensemble engaging in complicated choreography, but to what end? It’s like a massive engine revving while the vehicle remains in park.

It’s only toward the end of the first act, when the three women each indulge in a revenge fantasy about Hart, that the show gains some traction. Judy imagines a ’50s-era noir, Doralee a rip-roaring western, and Violet a cracked Disney-type fairy tale. Act Two, where the imagined comeuppance has a chance to come true, should be more of an outrageous romp, but at least the book tightens up a bit.

The specter of Dolly Parton hangs over the entire affair — literally. In a framing device that’s even tackier than it sounds, a video of Parton introducing the characters is projected onto a clock that hangs above the stage. At the end of the show, she returns for a where-are-they-now epilogue. Director and choreographer Jeff Calhoun is clearly doing his best, but the Parton videos are just another indication that 9 to 5 is simply a second-rate musical, and no number of impressively staged numbers can allay the feeling.

Fortunately, this national tour is stocked with talent for its three leads. Hoty carries a formidable comic presence, displaying flawless timing as the no-nonsense Violet. Parris is a vocal powerhouse, and the jaw-dropping run she performs in the penultimate “Get Out and Stay Out” makes one wish this show utilized those pipes more. DeGarmo, who’s coming into her own as a musical theater talent, practically becomes Dolly Parton onstage, emulating her speaking and singing voice with a precision that extends beyond mere imitation. It might seem like a lazy choice to play the character just like the role’s originator, but she does it so well, there’s hardly a reason to complain.

With a set of rotating cubes that are frequently and efficiently used in Kenneth Foy’s scenic design and whimsically nostalgic costumes by original Broadway costumer William Ivey Long, 9 to 5 looks the part of a classic-to-be. Appearances can be deceiving, however.

9 to 5: The Musical is on stage at the 5th Avenue through April 24, with performances Tuesday through Sunday. Tickets are available at the 5th's website.
Posted by Dusty at 4:34 PM