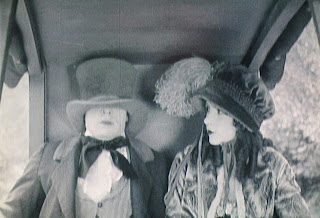 Article first published as Blu-ray Review: Our Hospitality on Blogcritics.

The Film
With Our Hospitality, Buster Keaton made the jump into the feature narrative world, where he would go on to blend enormous stunts, ingenious sight gags and stories packed to the brim with pathos into all-time classics like The General and Sherlock Jr.

Released in 1923, Our Hospitality wasn’t the first feature film Keaton wrote and directed, but it’s far more of a signal of things to come than Three Ages, which was released that same year and featured three separate films connected by a loose thematic thread. Our Hospitality features Keaton embracing a mythic tale with gusto, combining unabashed Griffith-style melodrama with his unimpeachable visual wit.

Inspired by the Hatfield-McCoy feud, the film tells the story of a generation-spanning struggle between the McKay and Canfield families in the 1800s in rural Kentucky. A dramatically lit and staged prologue shows a McKay man gunned down by a Canfield during a thunderstorm, with his wife and infant son just yards away inside the house. The woman vows that her son will not get mixed up in the feud and sends him away to live with an aunt in New York City.

That infant grows up to be Willie McKay (Keaton), and when he receives a letter informing him of his right to claim his family’s estate, he decides to travel back to Kentucky. He boards a crude steam engine, and begins the long journey, where Keaton explores his fascination with train travel in a way that presages the grand action sequences of The General.

The train has its share of problems, and on the ride, Willie bonds with his seatmate, a shy girl (Keaton’s real-life wife Natalie Talmadge) who invites him to dinner when they arrive. Trouble is, she’s a Canfield, and when Willie is recognized by the Canfield patriarch (Joe Roberts) and his sons (Ralph Bushman, Craig Ward), they pledge to kill him.

But as proper Southern gentlemen, they won’t harm Willie while he’s within the confines of their four walls, setting off a series of comic mishaps as Willie tries to outmaneuver his enemies.
Our Hospitality showcases Keaton’s flair for orchestrating gags small and large. He derives laughs out of the way he pulls a gun from his sleeve just as adeptly as out of the staging of a terrifyingly raging waterfall.

There’s really no sense of Keaton trying to gradually work his way into larger stunts with this film, as an exploding dam and the climactic waterfall sequence generate huge laughs and excitement with their ambitious scale. Keaton’s willingness to throw everything into his creations is always apparent on screen. In many ways, he’s the ultimate “action comedy” director, in the very best sense of the term. 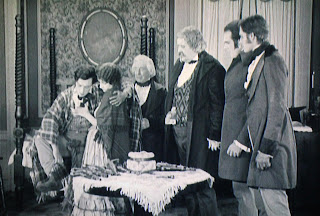 The Blu-ray Disc
Our Hospitality is presented in 1080i high definition with an aspect ratio of 1.33:1. The image quality here is certainly lacking when compared to the previous Kino Keaton Blu-rays, but it’s nothing to get too worked up about. While the image doesn’t have the clarity and sharpness of say, The General, it retains a healthy amount of fine detail and is free from any noticeable compression artifacts. Damage levels are pretty standard for a film of this age, with consistent but mostly minor scratches popping up throughout. The film’s sepia and blue (for the nighttime scenes) color tinting appears stable and consistent.

Audio options include a score composed and conducted by Carl Davis in 5.1 DTS-HD Master Audio or 2.0 stereo as well as a 2.0 score compiled by Donald Hunsberger.

Special Features
A solid selection of extras accompany the film, best of which is a 30-minute making-of featurette that doubles as a visual essay on the film, written by Patricia Eliot Tobias and David B. Pearson.

Two additional films are also included: The Iron Mule, a 1925 short that features the same train as Our Hospitality and has Keaton appear in a cameo as an Indian chief, and Hopsitality, a 49-minute alternate cut of the feature. The film includes an introduction that attempts to elucidate the mysterious existence of this version. The print has suffered a lot of nitrate decay and as it doesn’t include any additional scenes, it’s mostly just a curiosity, but a nice inclusion anyway. It’s accompanied by an organ score by Lee Erwin.

The Bottom Line
No mere early effort, Our Hospitality is an essential part of any Keaton or silent comedy library.
Posted by Dusty at 2:46 PM