The Mikado and Topsy-Turvy — The Criterion Collection 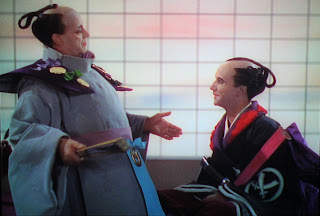 Article first published as Blu-ray Review: The Mikado and Topsy-Turvy — The Criterion Collection on Blogcritics.

The Films
Gilbert and Sullivan fans have a lot to be grateful for this month with the Blu-ray releases of The Mikado and Topsy-Turvy. The former immortalizes one of the pair’s most well-known achievements on celluloid and the latter features Mike Leigh opening up the world behind the creation of the opera. Released separately by Criterion, the films are fantastic companion pieces to each other and offer two perspectives on a partnership that left an indelible mark on musical theater.

1939’s The Mikado features director Victor Schertzinger bringing Gilbert and Sullivan’s 1885 comic opera to the screen, and although the film has been (somewhat) rightfully derided for its stage-bound aesthetic and truncated state, it would take a real cynic to dismiss it outright. The film stars a number of stage performers from the D’Oyly Carte Opera Company and gleefully conveys the inspired silliness that makes Gilbert and Sullivan so much fun.

In one of the more controversial casting choices, American singer Kenny Baker stars as Nanki-Poo, son of Japanese ruler the Mikado (John Barclay), who flees and disguises himself after his father decrees he must marry the hideous Katisha (Constance Willis). Nanki-Poo is really in love with Yum-Yum (Jean Colin), but she is betrothed to Ko-Ko (Martyn Green), a bumbling public servant who finds himself given the position of Lord High Executioner.

Nanki-Poo pines after Yum-Yum with little hope of ever being with her, but when Ko-Ko receives a command to carry out an execution lest he be killed himself, he seeks to come to an agreement with Nanki-Poo that will give them both some measure of satisfaction. 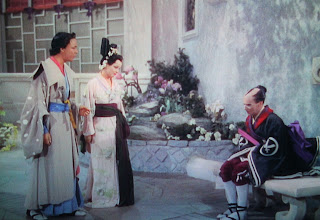 The Mikado’s confluence of forbidden love, hidden identities and comically inept characters clearly shows the foundation that Gilbert and Sullivan laid for the plot machinations in legions of musical theater comedies to come. This is a fundamentally silly show, from its fictional ancient setting where flirting is the greatest offense to the benignly ridiculous renderings of Japanese attire. It’s also unerringly delightful, from the verbal patter between characters to the musical numbers, among them the instantly recognizable “Three Little Maids from School Are We” and “A Wand’ring Minstrel I.”

Although Nanki-Poo is given a more prominent role in the film version in keeping with Baker’s star status, it’s really D’Oyly Carte performers Green and Sydney Granville as Ko-Ko’s adviser Pooh-Bah who propel the comedy, and any artificiality that this film version introduces is easily overcome by their natural magnetism.

Photographed in appropriately fantastical three-strip Technicolor, this first film version is an imperfect, but valuable translation of the comic genius of Gilbert and Sullivan.

Fitting alongside The Mikado quite comfortably is Topsy-Turvy, Mike Leigh’s sprawling but assured backstage drama about the genesis of the stage version of The Mikado in the 1880s. The film opens with the pair dealing with their unsuccessful staging of Princess Ida, and the flop threatens to drive them apart as they are unable to come up with a suitable new production they both agree on. 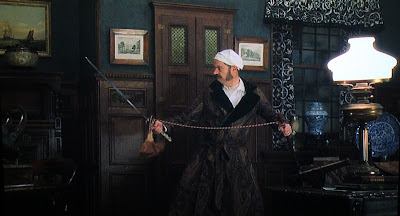 Leigh frames Gilbert (Jim Broadbent, in one of his finest roles) and Sullivan (Allan Corduner) as two fundamentally different people, brought together by their mutual success, but possessing divergent ideas about what success means. Gilbert strives to be a great artist, and is obsessed with creating something meaningful, often to the detriment of his personal life and his neglected wife, Kitty (a superb Lesley Manville). Sullivan is more interested in living the good life, enjoying wild parties and wild women.

Still, the two are able to come to an agreement about staging The Mikado, which Gilbert is inspired to write after attending a Japanese expo in London, and much of the film focuses on the backstage struggles that arise during its production.

Leigh, who has proven himself over and over again to be a masterful portrayer of the subtleties of human emotion and interaction, lends a deft touch to the material here. He sidesteps the overt emotional signposts and neat narrative packaging of a conventional biopic to deliver something altogether more realistic and more satisfying. That said, Topsy-Turvy may be Leigh’s warmest film — there’s an undeniable affection for the characters (more so for Gilbert than Sullivan) and for the unavoidable turmoil of a creative process. 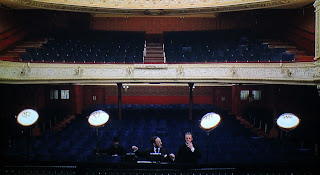 At two hours and forty minutes, the film might appear to be a grand-scale production, but it’s more of a collection of peeks behind the curtain that coalesce into a meaningful examination of what it means to create something.

The Blu-ray Discs
The Mikado is presented in 1080p high definition with an aspect ratio of 1.33:1. The film is in remarkably good shape, sourced here from a 35mm interpositive. Damage is almost nonexistent. Image quality lacks the sharpness one might expect due to other three-strip Technicolor Blu-rays, but the colors themselves retain their distinction, with very little of the color separation that can plague old three-strip prints being noticeable. The entire image does have some problems with pulsating, which can give the image a temporarily odd tint, but considering the age and availability of the film, this presentation is a nice surprise.

Audio is presented in an uncompressed monaural soundtrack that is overall rather weak, with sound quality that is consistently hollow and tinny, due to the source material no doubt. It doesn’t present too many problems with understanding lyrics, but the included English subtitles will probably be welcome for some straining ears.

Topsy-Turvy is presented in 1080p high definition with an aspect ratio of 1.78:1. The film looks wonderful, with an enormous amount of fine detail visible in both long shots and close-ups and impressive image clarity and stability that doesn’t waver throughout. The presentation is quite film-like with just the slightest bit of grain visible to give the image some texture. Facial detail and skin tones are especially nice.

The film’s audio is presented in a surround DTS-HD Master Audio track that really comes to life during the film’s musical numbers and stays grounded in clear, crisp dialogue during quieter scenes.

Special Features
One could almost see The Mikado serving as an extra itself on an edition of Topsy-Turvy, but the standalone treatment Criterion has afforded the film is excellent. New video interviews with Leigh and scholars Josephine Lee and Ralph MacPhail Jr. seem to balance each interviewee’s reservations about the film with a defense of its merits, and we get solid historical and analytical perspectives from these.

A short silent promo advertises a 1926 stage version of the show, while excerpts from 1939 radio broadcasts offer glimpses of The Swing Mikado and The Hot Mikado, both of which adapted the story with jazz music and black casts. A deleted scene from the film, featuring another song from Ko-Ko (and a Hitler cameo), is also included. A booklet with an essay by Geoffrey O’Brien rounds out the package.

On the Topsy-Turvy disc, we get an audio commentary that Leigh recorded for the original DVD release of the film, as well as a new and enormously entertaining conversation between Leigh and musical director Gary Yershon. A 1999 featurette is a pretty standard making-of, but features better interview footage from the cast and crew than these things usually have.

The real treasure here might be Leigh’s 1992 short film A Sense of History, which was written by and stars Broadbent. The two first discussed making a film about Gilbert and Sullivan while shooting this potent little black comedy, which satirizes staid documentaries about British nobles. Broadbent plays an Earl taking a camera crew around on a tour of his estate, but as the day progresses, he reveals more and more unsavory details about his life that make the plot of Kind Hearts and Coronets look tame by comparison.

The package also features the film’s theatrical trailer, three TV spots and a booklet with an essay by Amy Taubin.

The Bottom Line
They may not be packaged together, but you might as well pick up both of these extraordinary releases.
Posted by Dusty at 8:11 PM