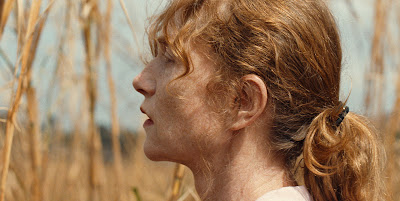 The Film
A brooding, roving portrait of near-madness fostered in isolation, Claire Denis’ White Material pulses with the unmistakable rhythms of a Denis film. One of the most accomplished filmmakers working today, she creates landscapes of feeling, where characters’ emotions dictate the tempo more than plot.

With the elliptically structured White Material, Denis builds her film around one woman — Maria Vial (Isabelle Huppert), the headstrong manager of a coffee plantation in an unnamed African country. Maria’s entire world is crumbling, as civil war is breaking out across the country and the family of her ex-husband (Christophe Lambert), who owns the plantation, has lost all faith in the operation. Workers have fled, the last helicopter airlifts to remove her from the country are departing and there is little tolerance for the brand of French colonialism her presence represents.

And yet, Maria remains undeterred in her determination to stay in the country and harvest her coffee. She picks up a collection of temporary workers to finish the job and ignores the signals of impending violence. Meanwhile, rebel bands of child soldiers roam the countryside and the government is especially interested in capturing a rebel leader who is simply known as “The Boxer” (Isaach de Bankolé).

The film’s flashback structure reveals some key details within the first few minutes, but soon, we’re plunged into the whirlwind that Maria finds herself in. Denis puts us squarely in Maria’s shoes for much of the film, shooting her from behind or in profile, and alternating these intimate close-ups with long shots that frame her against the land’s rugged beauty. For better or worse, Maria possesses a kind of primal identification with Africa — leaving would be like tearing herself away from a life force.

Denis’ profile shots of Huppert are frequent and surprisingly revealing. Framed this way, we see a woman with her face set like a flint, unwilling to relent to what should clearly be common sense. The Criterion cover art reproduces one of these shots, and it’s a perfect encapsulation of the film.

Huppert’s performance is magnetic and wild, but it’s hardly all unrestrained histrionics. She throws herself into the role with great physicality, her slender frame belying her strength of presence, but her expression remains that of one who has total clarity of thought. Contrasted with the rapid devolution of her son (Nicolas Duvauchelle) into a manic, self-styled warrior, Maria seems like a rational figure — but her world may have changed too much for her paradigm to remain valid.

White Material is a film that’s elegant in its roughness. It has a captured-on-the-fly feel, with choices made in the editing room more for their impressionistic than structural value. None of this is any surprise coming from Denis, who has a talent for plucking evocative moments out of thin air — or reels of footage in this case.

The Blu-ray Disc
White Material is presented in 1080p high definition with an aspect ratio of 2.35:1. This is a pleasing presentation that looks as sharp and damage-free as one would expect from a new film. Facial detail is especially excellent here and the film’s earthy tones are nicely reproduced, with browns dominating the color palette. Instances of bright color — a mural of a solider, a bloody and dismembered animal head — pop out with an attractive vibrancy. Created from a 35mm interpositive, the transfer is appropriately film-like, with an intact and very subtle grain structure.

Audio is presented in a 5.1 DTS-HD Master Audio track that is mostly front-oriented, but sprinkled with enough details to create a more dynamic listening experience. The French dialogue is crisp and clear, with the score by British band Tindersticks mingling unobtrusively alongside.

Special Features
A fairly light set of supplements accompanies the film, but fortunately we get excellent interviews with three of the film’s major players. All recorded exclusively for Criterion, separate interviews feature Denis, Huppert and Bankolé, with the first two in French and the latter in English. Denis is a marvelous interview subject, touching on areas from the film’s conception to production, as well as speaking about her personal connection to Africa and the turmoil that has been a near-constant there. Huppert and Bankolé speak more specifically to their individual roles, with Bankolé also touching on his experiences working on Denis’ debut feature, Chocolat.

The non-interview extras aren’t quite as exciting, with a single two-minute deleted scene and a short documentary about the film’s premiere in Cameroon. The theatrical trailer rounds out the disc’s features. Also included is a booklet with an essay by Amy Taubin.

The Bottom Line
Denis’ Criterion debut may not be her best work, but it’s certainly emblematic of her talent and the beautiful Blu-ray release is a great way to see the film.
Posted by Dusty at 4:41 PM