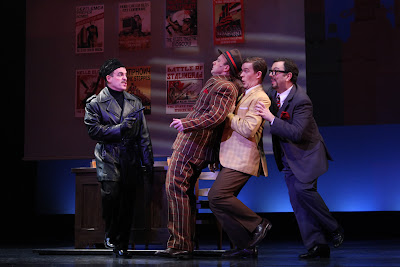 Sometimes, it’s best to stick to the basics. The writing team behind new musical comedy Iron Curtain, a madcap romp about a pair of New York City writers smuggled to the Soviet Union to help finish a musical, clearly gets that. There are no serious attempts in Iron Curtain to satirize the Cold War or the atmosphere of redbaiting rampant during its ’50s setting, and any self-reflexivity about the theater industry is more of a love letter than a pointed jab.

Rather, Iron Curtain is an unabashedly old-fashioned musical, complete with exceptionally broad gags and meat-and-potatoes musical numbers, from the ballads to the showstoppers. It’s also riotously funny, breathing new life into pun-based humor and hidden identity antics. Susan DiLallo’s book seems a little overstuffed (the show runs close to two-and-a-half hours), but is still remarkably brisk, with a plot that shifts smoothly from scene to scene. Stephen Weiner’s score and Peter Mills’ lyrics range from cleverly playful to outright farcical.

It doesn’t hurt matters that Village Theatre’s production of Iron Curtain is top shelf in every way imaginable, with superb casting, vivacious choreography, an enormous costume repertoire and scenic design both efficient and impressive.

Matt Wolfe and Jared Michael Brown star as Howard Katz and Murray Finkel, a musical songwriting team in New York City who just can’t catch a break. Being a struggling writer trying to break into Broadway is tough, but it’s way worse in the USSR, where Nikita Khrushchev (Allan Barlow) is executing writers for the dreck they’re putting on stage.

He commissions ministry head and theater-lover Yengenyi Onanov (Nick DeSantis) to find some American writers to punch up the Oklahoma! knock-off the Soviet government is trying to produce. Onanov travels to New York and kidnaps Katz and Finkel — prefect candidates because no one has ever heard of them (Sondheim would be missed, the kidnapping team realizes).

Initially distraught by their abduction, the pair is actually able to find enormous success behind the iron curtain by repurposing one of their failed shows into a propaganda piece about Western excess, and Finkel finds another reason to stay in Masha (Danielle Barnum), the show’s lead actress, whom he falls for.

Katz isn’t so enthusiastic, with worried girlfriend Shirley (Carolyn Magoon) back in New York and dominatrix-type Hildret Heinz (Bobbi Kotula) pursuing him fervently for some of his flesh. A plot to uncover the writing team as American spies by Soviet military man Sergei Schmearnov (John Dewar) might just force all of their hands, however.

Iron Curtain invites inevitable comparisons to The Producers, with the central relationship between Katz and Finkel looking a lot like the one between Max Bialystock and Leo Bloom. The shows also share penchants for outrageous accents, cultural stereotypes and theater in-jokes, but Iron Curtain does maintain a distinguishable comic sensibility that’s more broadly silly.

Wolfe is sublimely exasperated as the put-upon Katz, and his withering cynicism laced with a healthy current of desperation hits comic pay dirt over and over. A pitch-perfect line reading about his cousin being a good dancer almost stopped the show in its tracks at Thursday’s opening night performance, with the audience unable to compose themselves from laughter for what seemed like a solid minute.

Kotula also breaks out of a role that could be a little one-note as the sadomasochistic theater director with an enthusiastic embrace of every pun found in her lines. DeSantis’ giddiness and Magoon’s aw, schucks optimism also flesh out their characters with finely tuned details.

Iron Curtain is pure musical theater enjoyment, and it doesn’t attempt to be anything more than it is. Rousingly executed by Village Theatre, this is farce firing on all cylinders.

The show runs through April 24 at the Francis J. Gaudette Theatre in Issaquah and then moves to the Village’s Everett location from April 29 to May 22. Tickets range from $19 to $60 and are available for purchase at the Village Theatre’s website.
Posted by Dusty at 8:58 PM