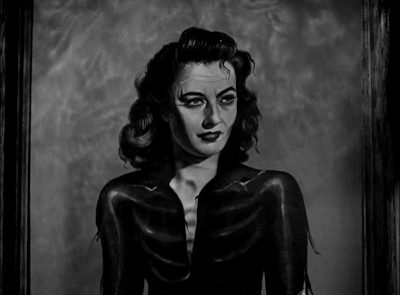 Any time you get two screen legends like Humphrey Bogart and Barbara Stanwyck together, there’s almost an implicit guarantee that the project will possess at least some merit. Now available from Warner Archive, The Two Mrs. Carrolls is the only film the two starred in together, and it’s worthy of receiving that faint praise, but not much else. Without the presence of the two stars, as well as a wickedly entertaining supporting performance from Alexis Smith, the film would be little more than a batch of good ideas that never find any traction.

The film, based on a play by Martin Vale, stars Bogart as Geoffrey Carroll, an artist who romances the impressionable Sally Morton (Stanwyck) while on a fishing trip in Scotland. All is going well until she discovers that he’s married and has a child, and despite Geoffrey’s protestations that his wife is an invalid who doesn’t love him, Sally cannot bring herself to stay with him.

Nonetheless, the film shifts forward, and we find Geoffrey and Sally have quickly married after the death of his wife, who is immortalized with a painting on the wall depicting her as the angel of death. They live in a small village near London with Geoffrey’s daughter, Beatrice (Ann Carter), an inconceivably precocious little girl. The quietude gives Geoffrey the opportunity to pursue his painting, but any sense of marital bliss is cut short by the appearance of the well-to-do Cecily Latham (Smith), who shows an immediate interest in Geoffrey — and he reciprocates.

Soon, Geoffrey seems touched by madness and Sally is beginning to come down with a debilitating illness. He starts work on a new painting that no one’s allowed to see, and it seems as if he’s trying to exorcise his inner demons on the canvas.

The Two Mrs. Carrolls has a couple of old pros in front of the camera, and Bogart conveys an ever-shifting sense of mental stability without resorting to histrionics. Stanwyck isn’t given quite so plum a role, and she spends much of the film in a thankless state of naïveté as her world is clearly crumbling around her. Once the character is given a little more willpower as she approaches the horrifying truth, Stanwyck shines as a woman trying to quell oncoming paranoia.

That’s all well and fine, but up until the third act, director Peter Godfrey commands a film that’s strangely inert — we hear people talk about doing sinister things a lot more than we see them doing them, and the lackadaisical pacing renders most of the film’s noirish ambitions impotent. Fortunately, the last act tends to overcome some of the film’s sleepiness, with a horror film finale that is efficiently blocked and features Bogart at his most wonderfully unhinged.

The Warner Archive release of the film features a remastered presentation, but the image quality is pretty comparable with many unremastered Archive titles. Scratches and blotches are persistent and there are a few instances of warp and jitter, but contrast levels and image clarity are solid. Audio is quite clean, with any hissing or crackle mostly nonexistent. The disc includes the film’s theatrical trailer.
Posted by Dusty at 8:54 PM