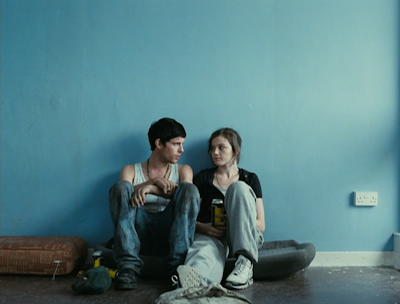 Andrea Arnold does something kind of astonishing in Fish Tank, simultaneously paying homage to a long line of British cinema — from the kitchen sink films of Lindsay Anderson to the social realism of Ken Loach — while blazing her own trail. Fish Tank feels eminently familiar in a number of scenes, but the scenes coalesce into a film with its own texture and rhythms.

Arnold is greatly aided by Katie Jarvis, the effortlessly natural and explosive actress who stars as main character Mia. Jarvis was discovered in public by a casting director who saw her fighting with her boyfriend and here, she brings qualities of both a non-professional actor and a born performer to her first role. She’s in nearly every frame of the film, and possesses a magnetism that seems to force the camera to stay put on the kinetic energy she spontaneously gives off.

The film takes place in and around tenement housing in Essex, where 15-year-old Mia lives with her mother, Joanne (Kierston Wareing), and younger sister Tyler (Rebecca Griffiths), a foul-mouthed riff on the precocious youngster archetype. To call Joanne a bad mother might be too generous, as she seems to have no conception of what the position entails, allowing her children to drink freely and either berating them or ignoring them as her mood fits.

Mia’s world is bleak, but Fish Tank avoids becoming excessively downbeat due to the character of Mia herself, who projects attitude into every situation she finds herself in and hangs onto her dream of becoming a dancer. The film opens with her breathing heavily, coming down from the high of dancing in her room, and the lensing of the scene matches her intensity. Arnold frequently puts us up-close-and-personal with Mia, either filling the frame with her or with what she sees.

Mia has irrepressible spunk, but there’s no denying the miserable elements of her existence, which are all around her. It’s no secret that her dancing abilities will hardly be enough to remove her from this life.

And yet Mia’s life begins to shift with the arrival of Connor (Michael Fassbender), Joanne’s boyfriend who seems to just become part of the family’s life one day. Fassbender plays the part perfectly, constantly shifting between a sense of menace and a sense of kindness, and Mia is sucked into his orbit by the humanity he injects into her life.

Once Connor enters the picture, we get a sense that Mia is finally being propelled by basic human expectations of relational interaction and common decency. He treats her like a human being, and for fleeting moments, her world seems to stabilize. But a lifetime of neglect and her burgeoning sexuality ensure that any apparent normalcy isn’t going to be a permanent fixture.

What follows is expected, but Arnold pushes her film to exhilarating lengths in the third act that comes after it, as the humanity that had briefly offered Mia hope is stripped away from her, and she responds in kind.

Fish Tank barrels toward an uncertain ending, but Arnold offers a rare moment of peace and tranquility in the hopeful conclusion. Any sense that Arnold was simply retracing the steps of similar filmmakers that come before her is almost completely obliterated by the film’s final moments. Arnold boldly blends dreary realism and vivid energy to thrilling effect.

Criterion’s DVD of the film appears to be somewhat thin on supplements at first glance, but there’s a lot of excellent bonus material here, best of which is three remastered presentations of Arnold’s three short films, "Milk" (1998), "Dog" (2001) and "Wasp" (2003), which all presage elements of Fish Tank to varying degrees. The Oscar-winning "Wasp" is a revelatory, sympathetic and heartrending story of a single mother struggling to find common ground between her parental responsibilities and personal desires. It’s worth picking up this edition for it alone.

Also featured on the disc is an interview with Wareing, who talks about the jovial atmosphere while making the film and the process that Arnold used in filming (actors only saw a few pages of the script at a time). An audio-only interview with Fassbender was conducted after a screening of the film, and the relaxed, friendly conversation is a great listen. A stills gallery features more than 50 on-set photos by Holly Horner and audition footage from 10 candidates for the role of Mia (but not Jarvis unfortunately, as she didn’t even have a proper audition most likely) shows them putting on their best dance moves.

Rounding out the package is the film’s theatrical trailer and a booklet with a wonderful-as-always essay by Ian Christie. It’s too bad we don’t get to hear from Arnold or Jarvis, but this is an excellent edition for a modern masterpiece.
Posted by Dusty at 11:38 PM