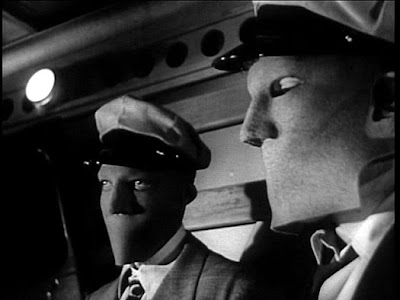 The actual criminals are a seedy trio played by Neville Brand, Lee Van Cleef and Jack Elam, none of whom know each other, and their identities are hidden during the actual robbery by cloth masks with eye-slits. Only the robbery’s mastermind knows the identity of the three, and his identity is kept secret by a similar mask.

After Rolfe spends a night in the slammer on the false charges, he’s released and thirsty for revenge. He tracks the robbers to Mexico, and after one is killed by the police, he assumes the dead man’s identity to infiltrate their ranks.

At a fishing resort in Mexico,where they all meet to collect their share of the money, Rolfe makes his plans for revenge, while simultaneously growing closer to a woman there (Coleen Gray) and her father (Preston Foster), a retired police officer.

Kansas City Confidential famously served as the inspiration for Quentin Tarantino’s Reservoir Dogs, and the film possesses a similar raw, violent feel. Rolfe is a character who’s essentially innocent (at least initially), but Payne plays him in such a coldly sinister manner that he seems to become some kind of antihero just on the basis of his snarl. In Kansas City Confidential, nearly everyone is sullied by the prospect of earning dishonest money. It’s a down-and-dirty noir that’s effortlessly entertaining.

The Blu-ray Disc
Kansas City Confidential is presented in 1080p high definition with an aspect ratio of 1.33:1. Like most public domain titles, the film has been released by many companies, usually with cringe-inducing results. Released here by HD Cinema Classics in its Blu-ray debut, Kansas City Confidential looks better than expected by public domain standards, although the Blu-ray has its share of issues. On the plus side, the print used here is exceptionally clean with a minimum of scratches or other damage. Unfortunately, the image has some contrast issues especially apparent in boosted whites, which pop up fairly frequently throughout. Occasionally the image appears soft and waxy — a sure sign of excessive digital manipulation — but there are many scenes where this is not an issue, and the transfer appears rather impressive. It never totally achieves the film-like presentation a great transfer gives to a black-and-white film, but considering the circumstances (and the price), this release is not so bad.

The audio is unfortunately only presented in lossy options, with a Dolby 5.1 and 2.0 track available. There’s essentially no difference between the two, and although the sound is a bit tinny at times, it’s a clean mix that presents the dialogue and Paul Sawtell’s score adequately.

Special Features
There’s hardly anything here to speak of. A theatrical trailer and a brief restoration demo (accompanied by unspeakably cheesy music) are found on the disc, and a movie art postcard is stuffed inside the case. The set also includes a DVD of the film with the same extras on it.

The Bottom Line
It’s easy to write off public domain releases, and with PD Blu-ray releases like to profligate, we’re certainly in for our share of crappy discs. Fortunately, this isn’t one of those. It’s nowhere near perfect, but tempered expectations help.
Posted by Dusty at 8:05 PM