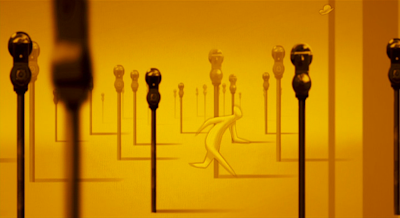 The Film
Based on the events surrounding Allen Ginsberg’s 1955 poem Howl, the film of the same name feels both ambitious and slight at the same time. Directed by documentary filmmakers Rob Epstein and Jeffery Friedman, Howl explains with a title card that it’s made up entirely of actual words spoken by the real people (interviews, court records, the poem itself), and in some ways, this film is like a documentary because of it.

There are moments where that feels true — notably, in interview scenes where James Franco absolutely nails the essence of Ginsberg — but the film has objectives beyond this authenticity. It all amounts to three different types of films trying to coexist, with variable levels of success. Besides the documentary element, we get animated segments that illustrate the abstractions of Ginsberg’s poem and a courtroom drama that details the obscenity charges leveled against publisher Lawrence Ferlinghetti (Andrew Rogers) for printing Howl.

The animated sequences range from ugly to sublime, with hand-drawn animation looking better than some of the crude computer animation that’s featured, but even when it doesn’t quite work, this is a bold attempt to merge literature and cinema. The courtroom scenes on the other hand often feel perfunctory and are drained of almost any tension. They’re not a total waste of time though, as they’re populated by a remarkable cast (Jon Hamm as the defense attorney, David Strathairn as the prosecutor, Bob Balaban as the judge, and Jeff Daniels, Mary-Louise Parker and Treat Williams as witnesses).

At 84 minutes, the film feels a little too overstuffed with ideas for its frame. The approach to storytelling befits the nature of the material, but a bolder step toward more visual abstraction and less rote courtroom proceedings might have made Howl even more of a cause to celebrate. As it stands, the film has lots of good ideas, and executes a majority of them well. They don’t seem to coalesce into a wholly satisfying work, but that’s hardly a reason to steer clear.

The Blu-ray Disc
Oscilloscope Laboratories presents Howl in 1080p high definition with an aspect ratio of 1.85:1. The presentation handles almost everything quite well, with the black-and-white sequences of Ginsberg reading the poem, the greenish-tinted interview scenes and the golden courtroom palette all looking quite nice. The image is stable and filled with rich detail, and the color saturation is quite pleasing. The animation sequences are more variable, although it’s quite likely this has to do with the source material. Some of the shots have a noticeable softness and there are infrequent banding artifacts that stick out when they do crop up. Overall though, this an excellent high-def presentation.

Audio is presented in a 5.1 DTS-HD Master Audio track that is clean and clear and forceful when it needs to be, but potentially has some problems with its levels, as everything outside of the animated scenes seems to be mixed at a slightly lower volume, causing one to keep the remote handy at all times. This persists throughout the film.

Special Features
A nice collection of extras has been assembled in this release, which is a dual-format two-disc set, with both a Blu-ray and a DVD disc of the film. Most of the special features are included on both discs.
An audio commentary features Epstein, Friedman and Franco, which the three recorded together. A 40-minute making-of features interviews with the directors and much of the principal cast, and covers the origin of the film, its photography and the divergent visual styles, among other topics. Interviews with some of Ginsberg’s collaborators that Epstein and Friedman conducted during their research are also included in a separate feature.

An audio-only feature has Franco reading Howl, which he also does in the film, but here you get it without interruption if you please. You can also hear Howl directly from the source in video footage of Ginsberg reading the poem in 1995 at the Knitting Factory in New York.

Features only included on the Blu-ray include two more poems read by Ginsberg — Sunflower Sutra and Pull My Daisy — from that same reading and a Q&A with the directors at the Provincetown Film Festival, moderated by director John Cameron Mitchell.

The Bottom Line
Howl features an approach to filmmaking that is commendable even if it doesn’t always work, and there’s plenty to recommend here — not the least of which is Franco’s assured performance.
Posted by Dusty at 12:58 AM