Army of Shadows — The Criterion Collection 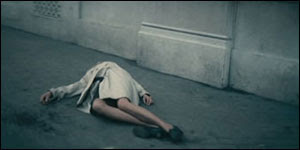 The Film
Jean-Pierre Melville’s Army of Shadows, a 1969 masterwork about the French Resistance during World War II, didn’t receive a proper release in the United States until 2006, and it fared poorly in France during its initial run. It’s not difficult to see why — Melville was accused of championing Gaullist principles and filtering the film’s French freedom fighters through the lens of a gangster film, the genre with which he’s most associated.

Army of Shadows is also relentlessly bleak, featuring a small band of French citizens not just struggling against the Nazis, but with their own compromises and commitment to the cause. Long-term victory is never in sight — the war rages around them for the entirety of the film — but short-term victory is hardly ever achieved either, and Melville creates a disquieting sense of futility with this monumental work.

Like his films about gangsters and thieves — Bob le Flambeur, Le Samouraï and Le Cercle Rouge among them — Melville approaches Army of Shadows with a meticulous sense of detachment, but this film is drained of any jazzy coolness or sly irony that suffused his gangster films. Instead, we get cold, unblinking reality that is made all the grimmer because of the real-life events that surround what occurs in the film.

Lino Ventura stars as Philippe Gerbier, the leader of a small band of rebels that includes fighters played by Paul Meurisse, Jean-Pierre Cassel, Simone Signoret, Claude Mann, Paul Crauchet and Christian Barbier. As the film opens, Gerbier is being taken to a concentration camp. He plots his escape, and in an astonishing sequence, makes it happen with a quick knife to the throat of an attending guard. This scene and others like it punctuate long stretches drained of action or intrigue that allow us and the characters to contemplate the chances of survival — and just what it will take to survive — in this war.

When the film does offer answers to that thought, they’re not attractive ones, as is brutally seen in a gut-wrenching moment where Gerbier and company kill one of their own who betrayed them to the Nazis. Melville extends the scene to almost excruciating lengths, from the discussion of method to the act itself, and the resulting gravity of war’s moral implications hangs over the rest of the film like a heavy blanket.

Army of Shadows is a brilliantly achieved human tragedy, with a third act that’s somehow more devastating than anything that’s come before it. Melville, who was involved in the French Resistance himself, executed an elegantly constructed tale that is all but guaranteed to haunt the recesses of your mind for some time.

The Blu-ray Disc
Army of Shadows is presented in 1080p high definition with an aspect ratio of 1.85:1. Criterion gives us the same 2004 restoration of the film here that it did on its superb 2007 DVD edition of the film. As good as that presentation was, the Blu-ray improves on it slightly here, giving us a more natural color palette that is also slightly more desaturated of color, in line with Melville’s intention. Sharpness and clarity is improved slightly as well. Overall, the film looks magnificent here, with a nice layer of film grain that’s never too obtrusive and plenty of fine detail in every shot. The 2004 restoration scrubbed away any notable instances of damage.

Two options for audio are present — the default uncompressed monaural track and a 2.0 DTS-HD Master Audio track. Both are good choices, with no distracting elements popping up during the film’s quiet moments and strong, forceful sound coming forth during bursts of violence. Dialogue is stable and clear throughout.

Special Features
The supplements are identical to those on the packed DVD edition, now on a single disc instead of two. Film historian Ginette Vincendeau contributes an audio commentary, which was recorded for BFI in 2006. Criterion-exclusive interviews with director of photography Pierre Lhomme (who oversaw the restoration) and editor Françoise Bonnot lend a retrospective feel to the supplements.

There’s also plenty of archival material to dig through, including interviews with Melville and most of the principal cast. Several short excerpts of archival programs also feature interviews with actual resistance fighters. A solid 2005 half-hour documentary on the film features interviews from a number of those involved and is a nicely well-rounded piece for those who don’t want to look at everything. Trailers for the film’s original release and U.S. premiere and a restoration demonstration by Lhomme are also included on the disc.

The Bottom Line
Criterion had already outdone themselves with the 2007 DVD release of this staggering film, but the added Blu-ray bump in quality only makes it that much more of an essential release.
Posted by Dusty at 1:11 AM