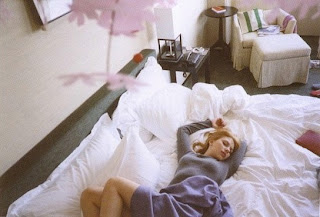 The Film
Sofia Coppola’s Lost in Translation is a film that I come to appreciate more with each viewing. Her story of fleeting human connection in a modern world has always struck a chord with me, due in large part to Bill Murray’s masterfully melancholy performance, but the film reveals itself to be a richer experience each time. Moments that once felt slight now carry an added resonance and interactions between characters feel more authentic. Coppola’s dreamy sense of mood and pace makes for a film that sticks with you.

Scarlett Johansson stars as Charlotte, a recent philosophy graduate tagging along with her photographer husband (Giovanni Ribisi) on his business trip to Tokyo. She’s like an aimless ship adrift in the luxury hotel where they’re staying, unable to sleep and unsure of her future. In the same hotel is Bob Harris (Murray), an erstwhile movie star in Tokyo to shoot a commercial for Suntory Whisky. He’s there for a distinct purpose, but any manufactured enthusiasm he musters while doing the commercial is washed away as soon as the cameras stop rolling. The distant voice of his longtime wife nags him about neglecting his family and picking out décor for a remodel over the phone.

Bob and Charlotte’s paths edge ever so closer slowly, and eventually the two settle into a companionship that is sweet, delicate and filled with genuine care — something that more than 90 percent of contemporary Hollywood romance films can’t lay claim to. Together, they break out of the shell out of the hotel to explore the city of Tokyo, which Coppola shoots with an irrepressible delight, and each one gives the other a reason to face the future with hope.

Murray is a revelation, allowing the audience the opportunity to see every crack in his exterior and proving that he’s no less charismatic in dramatic roles than he is in comedic ones. Johansson, whose career has taken turns for the underwhelming, nevertheless shows that she has a good performance in her, and she balances fragility and strength to great success here.

Lost in Translation is a film that seems poised to only grow in stature as the years pass. Its modest minimalism isn’t a sign of slightness and charges against Coppola of simply portraying self-indulgent ennui of the privileged seem to deliberately miss the point. The confident aesthetic and moving performances of the film ensure its status as one of the great American films of the past decade.

The Blu-ray Disc
Lost in Translation is presented in 1080p high definition with an aspect ratio of 1.85:1. This disc represents a huge improvement over the standard DVD release, with colors appearing more vibrant, images appearing sharper and fine detail in objects, clothing and faces much more apparent. While the scenes that feature Tokyo’s nightlife will undoubtedly impress, some might be frustrated at the softness present in a good portion of the transfer. For the most part, this is likely attributable to the source material, which featured Coppola and cinematographer Lance Acord using guerilla techniques to get a number of shots. Any image softness feels natural to the look of the film, as does the fairly persistent film grain that gives the image a nice sense of texture.

The 5.1 DTS-HD Master Audio track is pitch-perfect, providing a full range of ambient sound in crowd scenes, dynamic range for the excellently curated soundtrack and strong, clear dialogue from the fronts.

Special Features
This is mostly the same old, same old, with only a trailer and a superficial promo for Coppola’s latest, Somewhere, added to the previously available extras. Those extras include several deleted scenes, a 30-minute making-of featurette, a fairly informal conversation between Murray and Coppola, the extended sequence of the film’s Matthew’s Best Hit TV talk show and a music video for Kevin Shields’ “City Girl.”

The Bottom Line
The film is worthy of a more stacked edition, but the high-def upgrade suits Lost in Translation very nicely.
Posted by Dusty at 12:50 AM