Blu-ray Review: The Last Temptation of Christ from the Criterion Collection 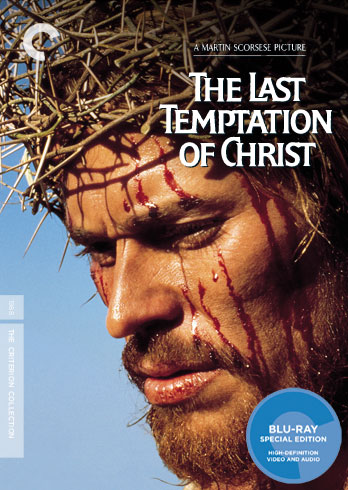 The Film
Martin Scorsese's deeply thoughtful, gorgeously shot The Last Temptation of Christ is one of the most moving, beautiful and spiritual films ever made about the life of Jesus — not that you would know it from the national conversation that surrounded its 1988 release. These days, the culture warriors have moved on it seems (although Stephen Colbert told Willem Dafoe he hadn't forgotten about it in an interview just last week), but Scorsese's film remains an iconic work thanks to its artistry, not its controversy.

Based on Nikos Kazantzakis' 1953 novel of the same name, The Last Temptation of Christ focuses on the uniquely human element of Jesus. The Gospels inform us that he was both fully God and fully man, but his divinity is certainly more prominent. Last Temptation largely follows the major events of the Gospels, from the Sermon on the Mount to the calling of the disciples to the joyful events of Palm Sunday and the horror of the crucifixion, but peers at Christ from a different angle.

We see doubt, confusion, fear and a desire for normalcy all coursing through Jesus (Dafoe) as we first meet him, constructing crosses for the Romans and confronted by Judas (Harvey Keitel) for his complicity in the killing of Jews. But this is not some bizzaro world construction, designed to subvert the values of the Jesus we know — he's well-intentioned but troubled by his sense of purpose. After a sojourn in the desert and a meeting with John the Baptist (André Gregory, capturing the wildness of the character like no other film portrayal), Jesus embraces his calling to speak for God and his position as God's own son.

And yet the humanity continues to be on full display alongside the divine miracles and penetrating parables. Jesus' relationship with Judas is one of the most intriguing alternate looks, fraught with tension and Judas' desire for a more political leader but deeply imbued with love and friendship all the same. In so many of the great biblical epics, it's hard to imagine the stiff, remote Jesus characters having any real relationships at all; here, we see a man with emotions and desires. You know blood flows throw the veins of Dafoe's Jesus and not just because he spills it in a sacrifice for all mankind.

The film's titular last temptation comes up on the cross, as a little girl claiming to be his guardian angel escorts him off and to his wedding to Mary Magdalene (Barbara Hershey), a woman who he's always felt a grave responsibility for. The imagined salaciousness of their romance never materializes — this arresting sequence does nothing to taint the figure of Jesus, but guides us to reflect on his sacrifice and life in a profound way. A sense of reflection is one of the film's chief takeaways, and for all of the vitriol that's been spewed in its direction, The Last Temptation of Christ will endure as a masterpiece of thoughtful spirituality.

The Blu-ray Disc
Criterion presents The Last Temptation of Christ in 1080p high definition and its original 1.85:1 aspect ratio. The disc represents a substantial upgrade over the 2000 Criterion DVD, presenting an image with excellent clarity and impressive film-like fine detail. Michael Ballhaus's dusty photography looks superb here, the earthy hues coming across especially nicely. The image isn't tack-sharp, but the slight softness appears to be Scorsese's desired look for the film, and the stability of the image clarity and sharpness doesn't waver.

The 5.1 DTS-HD soundtrack is fantastic, providing an immersive environment and offering a great showcase for Peter Gabriel's diverse score. Effects are dynamic, dialogue is crystal clear and ambient noise fills out the surrounds nicely.

Special Features
Criterion ports over pretty much everything from the DVD. Supplements are a little light but are solid. An audio commentary with Scorsese, Dafoe and writers Paul Schrader and Jay Cocks features the participants recorded separately. Shot-on-VHS location footage by Scorsese offers a look at production in Morocco, while an interview with Gabriel features him discussing the various influences on his score. Image galleries feature the instruments used in the score, productions stills, costume designs and ancillary research materials that shaped the look of the film.

The package also includes an insert with an essay by critic David Ehrenstein, slightly updated from his DVD essay to include a brief section on Mel Gibson's The Passion of the Christ.