The Film
By the time I got to Tiny Furniture, it was close to impossible to have formed an opinion inside a vacuum. Lena Dunham’s second feature had won South by Southwest’s top prize and become a bit of a cause célèbre in the independent/mumblecore-ish movement. It had also gained many, many detractors, and its announcement as a forthcoming Criterion title didn’t help any. 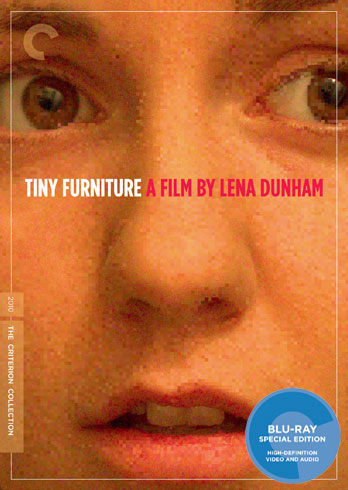 Now, doing my best to put aside notions of Dunham’s privileged upbringing, her flippant comments about Nick Ray, her autobiographical character’s admission that she hates foreign films and the fact that Azazel Jacobs already made a much better film about returning to an actual childhood New York City home with his own artist family members playing themselves, my reaction to Tiny Furniture is generally indifferent, one way or the other.

It is hard to leave the film thinking that Dunham has anything insightful to say at all about postgraduate malaise, the perils of privilege, shitty jobs, awkward friendships and sibling rivalry. Now, Dunham doesn’t seem to be striving for a grand statement in regards to any of these things, but the fundamental emptiness of Tiny Furniture emerges nonetheless.

Dunham has a knack for dialogue and not overly manufactured wit that is fitfully apparent throughout Tiny Furniture, and it’s this quality that seems to bode the best for a great future work. But the scattered sharp one-liners about entitlement or frozen dinners are engulfed by Dunham’s own mannered, obsessively self-conscious acting. Better are the slightly stilted Laurie Simmons (Dunham’s own mom) as Aura’s mother and the prickly Grace Dunham (her own sister) as sister Nadine, but any potential truthfulness in the numerous domestic scenes is frequently undercut by the performances.

If it weren’t for the ace, cleanly drawn cinematography by up-and-comer Jody Lee Lipes, Tiny Furniture wouldn’t stick out much from the crop of shaggy, hollow indies that have proliferated in the digital world. Dunham may one day make a film as incisive and personal as those from rough contemporaries like Jacobs or the Safdie Brothers, but for all of its autobiographical elements, Tiny Furniture isn’t it.

The Blu-ray Disc
Presented in 1080p high definition in its original 2.35:1 aspect ratio, Tiny Furniture looks sharp and clean here. Its digital images are nicely detailed, and the white expanse of the loft doesn’t betray any obvious digital artifacts. Colors aren’t terribly arresting, but the palette retains a consistent look. Naturally, there’s no damage to speak of.

The 5.1 DTS-HD Master Audio soundtrack is perfectly adequate for the dialogue-heavy film, with city noise and crowd chatter allowing for some light ambiance throughout.

Special Features
Fans of the film get a nice selection of extras, although there’s little here to convince a doubter to reassess their opinion. A 30-minute conversation between Dunham and Nora Ephron sees them discuss what it’s like for women in the industry, writing autobiographically and influences like Woody Allen. The great filmmaker Paul Schrader offers up a very defensive take of the film and Dunham, essentially claiming jealousy as the driving force behind the film’s many detractors.

Also included are Dunham’s first feature, Creative Nonfiction, and a filmed introduction by Dunham to it, and four short films that originated on YouTube — Pressure, Open the Door, Hooker on Campus and The Fountain, which appears several times in Tiny Furniture.  The package includes an insert with an essay by critic Phillip Lopate, who offers a much more cogent analysis of the film than Schrader.

The Bottom Line
Neither Dunham nor Tiny Furniture deserves the vitriol sent their way, but the film is hardly a revelation. A nice package by Criterion will be a treat for fans though.
Posted by Dusty at 8:18 PM