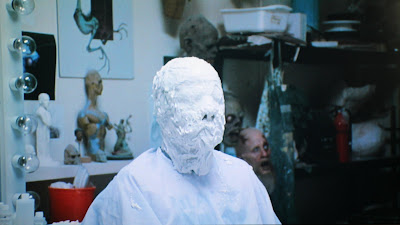 The Film
Sofia Coppola’s films have always been growers for me. I wasn’t particularly enamored with either The Virgin Suicides or Lost in Translation on my first viewing, but my appreciation has grown steadily for each upon subsequent revisits. With her fourth feature, Somewhere, I expect to experience a similar phenomenon. Somewhere is certainly a companion piece to Lost in Translation, but with more subdued rhythms and a less obvious emotional core, making it even easier to dismiss the first time around if you’re not expecting something so delicate.

Like Lost in Translation, Somewhere is an examination of emptiness and ennui among the privileged, although in a slightly different milieu. Johnny Marco (Stephen Dorff) is an enormously popular Hollywood star living in the Chateau Marmont hotel. His life is full of stimulation — driving fast cars, jet setting around the globe, staving off the hordes of beautiful women throwing themselves at him — but is simultaneously suffocating in its hollowness.

His life takes a bit of a detour with the arrival of his 11-year-old daughter Cleo (Elle Fanning), who begins to spend more and more time with him while her mother has a kind of emotional breakdown. The potential here for the precocious kiddo teaching dad what’s really important in life storyline is obvious, and fortunately avoided completely.

What we get instead are precisely observed moments — Johnny gets applied with old age makeup for a movie, he enjoys the company of a pair of twin pole dancers, he orders late-night gelato with his daughter.

Coppola allows almost every scene to really breathe, waiting several seconds (or more) beyond when we expect a cut. Some will call this pretentious or annoying or boring. But really, it’s an exercise in restraint, painting a portrait with fewer brushstrokes. It's a sensibility that allows the viewer to feel the emptiness in each frame. Harris Savides’ photography is frequently stunning in a relaxed, almost incidental way.

Dorff and Fanning exhibit a very sweet screen chemistry that relies on the subtlest of gestures. Older sister Dakota clearly got all of the histrionics, leaving Elle with a natural grace that lends the film its understated sense of hope.

Ultimately, it doesn’t feel like Coppola has a lot to say in Somewhere, but the film exhibits a formal maturation that might be even more obvious years or decades removed. The film sort of violates its own emotional control with an ending that’s frankly kind of silly, but there’s a lot that’s rewarding here for patient viewers.

The Blu-ray Disc
Somewhere is presented in 1080p high definition with an aspect ratio of 1.85:1. This transfer replicates the look of film admirably, untouched by any apparent digital manipulation. Savides’ desaturated and slightly hazy photography recalls the work he did for Greenberg, and like that disc, it’s marvelously represented here. Colors are more subdued than vibrant and the image is rarely tack sharp, but that’s the intended look, and it’s communicated perfectly.

Audio is presented in a 5.1 DTS-HD Master Audio track. The film is mostly very quiet with long stretches without dialogue, but when it’s there, it’s cleanly presented through the fronts. The track is unassumingly immersive, with little details sprinkled throughout the surrounds.

Special Features
Only a single extra finds its way onto this disc, but fortunately it’s head and shoulders above most featurettes of its ilk. The 17-minute making-of looks to be shot on film with a similar aesthetic to the movie itself, and features interviews with a number of the cast and crew. Elegantly constructed, it’s a pleasure to watch.

The Bottom Line
Somewhere will likely prove frustrating to many viewers, but I think Coppola is doing something interesting here, and I look forward to revisiting the film in the future.
Posted by Dusty at 5:37 PM