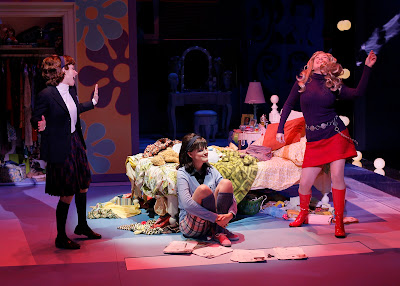 Article first published as Theater Review (Seattle): Vanities, a New Musical by Jack Heifner and David Kirshenbaum at the ACT Theatre on Blogcritics.

There’s a moment in Vanities, a New Musical where it appears the show might be heading for interesting territory. The musical tells the story of three women, best friends moving through life on increasingly divergent paths. As the first segment ends, the three girls, who are high school cheerleaders at the time, discover JFK has been shot. But relief sets in when that announcement is followed by a definitive declaration that tonight’s football game would most certainly not be canceled.

It’s flashes of pointed satire like this that makes one think Vanities could’ve successfully and entertainingly needled notions of small-mindedness, selfish choices, and yes, vanity, but the show ultimately decides for a sentimental tale of friendship through the ages, with a reassuring coda that reminds us that everything turns out fine in the end.

That’s not to say Vanities isn’t a crowd-pleaser, as the audience at Thursday’s premiere could certainly attest. The co-production of Seattle’s 5th Avenue Theatre and ACT Theatre features rousing performances from its cast of three, although it’s a bit hard to imagine them not growing weary of the relentlessly middling numbers by David Kirshenbaum—especially because the show is running 101 performances to accommodate both subscriber schedules.

The first two scenes are packed with cliché, and the gently mocking potshots the show takes at their respective popular cheerleader and sorority girl mindsets traverse expected territory.

The final scene—a funeral that causes all three to return to Texas—acts in direct opposition to the one that precedes it. Each character patches up her differences with another and has clearly learned a nice lesson—which each one makes sure to explain helpfully for the audience’s benefit. It’s all too hasty and neat.

One has to commend Ilika, Johnson, and Wildrick for embracing their roles with gusto. Their comic timing and voices don’t waver, even when the jokes and the songs remain entrenched in musty musical theater conventions. Johnson gets the best of both, with her bombastic number “The Same Old Music” acting as potent ridicule of her insistence on things staying the same when they clearly haven’t. 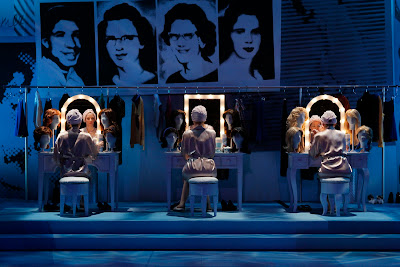 David Armstrong smartly directs the proceedings, and the interludes between each scene may just be the best part of the show. Each actress selects a new costume from the rack, changes wigs, and fixes her makeup at a row of vanities at the back of the stage in full view of the audience. These transitions hint at themes of depending on artifice that the show doesn’t really explore, but it’s an effective bit of stagecraft nonetheless.

Matthew Smucker’s scenic design continues the vanity motif, with a row of mirrored lights effectively turning the stage into one giant vanity mirror. Shifting panels and props rising up and down from trapdoors in the stage quickly establish a distinct sense of place for each scene, as do Catherine Hunt’s perfectly curated costumes.

Vanities was originally scheduled for a Broadway premiere in 2009, but that run never materialized. The play may have been a smash hit in its era, but like the women of this story post-college, this show’s glory days are in the rearview mirror.

Vanities, a New Musical is on stage now through May 1 in ACT’s Falls Theatre at 700 Union St. in Seattle. Tickets start at $55, with discounted rates available for students and people 25 and under. Tickets are available at ACT’s website.
Posted by Dusty at 6:26 PM