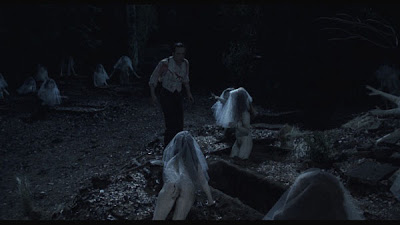 The Film
Alejandro Jodorowsky possesses what could modestly be described as an indisputably singular vision. The writer, playwright, comic book artist and filmmaker creates works that often defy description and could hardly be confused with the work of anyone else. His surrealist cult favorites El Topo and The Holy Mountain established Jodorowsky as a cinematic figure to watch in the ’70s and 1989 saw the release of Santa Sangre, an engrossing work of beauty and ugliness that has been tied up with rights issues for years.

Now, Severin Films has finally given the film the proper home video release that it deserves. Combining the surrealism and perversity of Luis Buñuel, the whimsy and larger-than-life imagery of Federico Fellini, and Jodorowsky’s own sense of striking visual poetry, Santa Sangre is all but guaranteed to plant itself into your mind and stay there for a long time.

Jodorowsky’s son Axel Jodorowsky stars as Fenix, a young man who begins the film confined to a mental institution. Flashbacks reveal to us the reason for his state. As a child, Fenix (played as a young boy by Jodorowsky’s other son, Adan) worked as a magician in the circus run by his parents, knife-thrower Orgo (Guy Stockwell) and trapeze artist Concha (Blanca Guerra). The shy boy is friends with deaf mime Alma (Faviola Elenka Tapia), but his world is shattered when Orgo’s affair with a woman tattooed from head to toe (Thelma Tixou) leads to a brutal attack on his mother. Concha is the leader of a heretical cult that worships an armless girl, and she befalls the same fate, with Orgo slicing off her arms before killing himself.

Having witnessed the whole thing, Fenix languishes in a state of stunned silence until one day, when his mother appears to him outside his window. He goes to her and is transformed into her servant, acting as the arms for his mother as she embarks on a murderous, revenge-fueled rampage. Redemption may be available to him though in the person of former friend Alma (Sabrina Dennison), who comes to his side in his moment of greatest turmoil.

Santa Sangre certainly has more narrative pull than other Jodorowsky films, and its plot owes a debt to classic horror (one scene shows Fenix imitating Claude Rains in The Invisible Man), but the film finds its identity in a steady stream of images that reside somewhere in the realm of dream or nightmare. Jodorowsky gives us elephant funerals, demented parades, seedy red light districts and haunted graveyards — each serving as a window into the fractured soul of the tormented Fenix.

Santa Sangre is an exquisite work of art. Its macabre plot and shocking violence are stepping stones toward a kind of cinematic beauty that Jodorowsky has a masterful command of.

The Blu-ray Disc
Santa Sangre is presented in 1080p high definition with an aspect ratio of 1.85:1. This transfer represents just about anything one could’ve hoped for in regards to the film, with an exceptionally clean presentation free of any damage. It retains a wonderful film-like look with the always-present but unobtrusive grain structure remaining intact throughout. Fine detail is apparent in both objects and faces, and the film’s bold colors are vibrant and cleanly detailed here, with red (both bloody and not) standing out most impressively.

Audio is presented in a 2.0 DTS-HD Master Audio track that does the best with the source material. The track is fairly clean, but awfully quiet in parts, and requires a higher volume than your average Blu-ray.

Special Features
Severin has assembled an incredible selection of extras here, both in terms of quantity and quality. More than five hours of bonus features are included, and there’s a lot of great material here, led by a comprehensive seven-part documentary on the film that runs for more than 90 minutes and features new interviews with most of the principal cast and crew. An audio commentary with Jodorowsky and journalist Alan Jones is also included, as well as about eight minutes of deleted scenes, with optional commentary by Jodorowsky.

We get a lot of chances to peer inside Jodorowsky’s mind with a number of different interviews with him from over the years — a 1990 episode of British series For One Week Only, a post-screening Q&A from 2002, a 30-minute interview from 2003 and a short interview conducted by the film’s composer, Simon Boswell, who also contributes a short film and a music video to the disc.

Also to be found in the mountain of extras is a featurette on the true story of a serial killer who served as inspiration for the film, a short film directed by Adan Jodorowsky and several trailers for the film and other Severin releases.

The Bottom Line
You couldn’t ask for a better release of Jodorowsky’s startling and stunning film
Posted by Dusty at 11:13 PM