The Film
One of Vittorio De Sica's Neorealist masterpieces and his proclaimed favorite, Umberto D. is a different sort of Neorealist film than what is perhaps De Sica's crown jewel, Bicycle Thieves. In a number of key ways, Umberto D. is not that different — the urban visual textures are similar, the lead performance from non-actor Carlo Battisti is appropriately unmannered and its tale of economic and class division woe is suitably socially conscious. 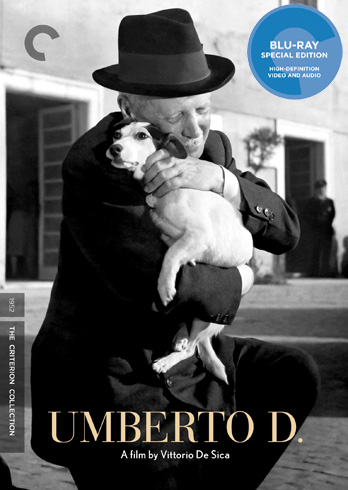 Still, there's a sentimental edge to Umberto D. that sets it apart. It's no melodrama — large portions of the film are spare and (at least cursorily) mundane depictions of urban life. But the heart of the film: Pensioner Umberto Domenico Ferrari's immensely intimate bond with his mutt, Flike, is loaded with heart-tugging sentiment. How could it not be? An elderly man essentially alone in the world, clinging to his loyal, intelligent dog who likes to walk on his hind legs and can hold a hat in his mouth to catch spare change.

Part of what makes Umberto D. such a great film is that De Sica deploys sentiment genuinely but judiciously. The film is never in danger of revealing a maudlin, manipulative side, as De Sica's canvas is much broader than a reductive "old man and his dog" summary would imply. Umberto's world also includes interaction with members on either side of his own class standing — his viciously bourgeois landlady (Lina Gennari), eager to evict Umberto as soon as possible, and the house's kind but naive maid (Maria Pia Casilio), whose seeming devotion to Umberto might not run very deep.

Despite these interactions, and those with a number of old friends he hails down in the street, Umberto is a man almost entirely alone, his meager pension funds unable to sustain him and his dignity almost completely obliterated. Is his relationship with Flike the only thing sustaining him or is it too just window dressing on a thoroughly unfulfilled life? De Sica straddles this gap, offering up a vision of postwar Italy where hope is in short supply, but isn't entirely snuffed out.

The Blu-ray Disc
Umberto D. is presented in 1080p high definition in its original 1.37:1 aspect ratio. This transfer offers up a distinct improvement on Criterion's 2003 DVD, featuring greater clarity, better grayscale separation and more abundant detail, seen especially in clothing fabrics and facial details. The quality of the transfer is a bit variable, owing to the condition of the source. There are some rather rough shots in the second half of the film where the image becomes notably fuzzier and more worn. Some scratches and print wear pop up on a regular basis in the second half as well. Additionally, contrast can look a little boosted, with some whites blooming in a couple of shots. Still, it looks quite nice overall and is a marked improvement over DVD. The uncompressed monaural audio is relatively free of distortion, and offers a solid, intelligible aural experience.

Special Features
Pretty much a port of the DVD here, although a couple text supplements haven't made it over. The main extra is an hour-long documentary on De Sica's career, which doesn't particularly focus on Umberto D. but is an excellent look into the filmmaker's career. Also included is a short interview with Casilio, whom De Sica discovered for this film before she went on to a fairly prolific career. The trailer is also on the disc, while the included booklet has a superb essay by Stuart Klawans and reprinted pieces from De Sica and Battisti.

The Bottom Line
Surely an essential film, and Criterion's Blu-ray upgrade is well worth it.
Posted by Dusty at 6:06 PM