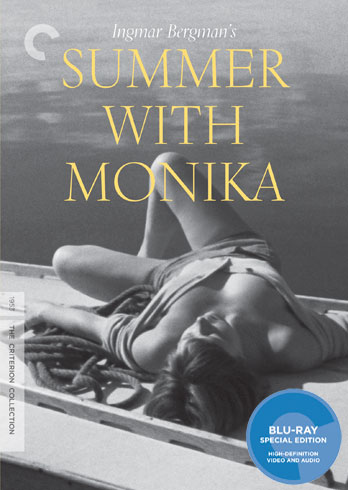 Longtime Bergman collaborator Harriet Andersson, in her first time working with the filmmaker, stars as Monika, a 17-year-old working class girl with a bottom-of-the-barrel job and a worse home life. Lars Ekborg is Harry, a 19-year-old with a similarly unfulfilling job. The two fall for each other, and soon, have abandoned their jobs and families on a summer vacation around the Swedish Archipelago aboard Harry's father's small motorboat.

Their escape from reality is a dream come true at first. Bergman captures the carefree youthfulness with effortless naturalism — the sun, the water, the grass all signifying the elemental simplicity of Monika and Harry's love. Andersson's natural, ruddy beauty (and one brief, hardly salacious nude scene) tinges the proceedings with a sense of pure, innocent eroticism.

But the dream cannot last. As fleeting as a Swedish summer, the lovers' sojourn is confronted by the need for food, gasoline, shelter. Monika insists she never wants to go back to Stockholm, but the return trip soon becomes inevitable. Here, Bergman shifts to an aesthetic no less naturalistic, but starker in its depictions. Pregnancy, poverty and infidelity seem to erase any memory of the ecstasy once shared.

The trajectory of the film isn't complicated, and it's easy to interpret the final act as the unavoidable downward slope of youthful naivete, but Bergman isn't quite so schematic here. Complicating a simple reading of the film are two stunning shots, where both Andersson and Ekborg gaze into the camera on separate occasions. The frame is tight and unblinking, and the surroundings fade to black as their piercing eyes confront our perception of their circumstances. It's a daring, bracing formal technique that anticipates the increasingly brilliant work to come from Bergman.

The Blu-ray Disc
Summer with Monika is granted a 1080p high definition presentation in its original 1.33:1 aspect ratio. Criterion's transfer is remarkable, retaining a healthy, celluloid-like grain structure and allowing for impressive amounts of fine detail throughout. The image is consistently sharp and clear, with impeccable grayscale separation and a paucity of damage. The uncompressed monaural audio is clear and distinct, if limited by age.

Special Features
Criterion includes a number of excellent extras, including an introduction to the film by Bergman, recorded in 2003 as part of Marie Nyreröd's series of interviews and a new interview with Andersson, conducted by Bergman expert Peter Cowie. Scholar Eric Schaefer contributes a fascinating piece on exploitation films and the recut version of Monika (which itself would have been a nice inclusion) and a World Cinema Foundation documentary offers up a wealth of behind-the-scenes footage shot by Bergman himself, and is accompanied by interviews with Bergman and Bibi and Harriet Andersson. The disc also includes the film's theatrical trailer. The package includes a booklet with an essay by Laura Hubner, a reprint of Jean-Luc Godard's 1958 review of the film and a promotional piece in which Bergman interviews himself.

The Bottom Line
An exceptional early work from one of the masters of cinema, Summer with Monika is presented in an excellent package by Criterion.
Posted by Dusty at 6:21 PM