The Films
Criterion closes out an exceptional 2011 by upgrading two early titles that sorely needed it — Seijun Suzuki’s deconstructive, gloriously disorienting crime films Tokyo Drifter and Branded to Kill. Replacing the lackluster 1999 DVD editions are two beautiful Blu-rays, and in a year where Criterion has given impressive high-def makeovers to lots of early titles (The Naked Kiss, Shock Corridor, Diabolique and Orpheus among them) these two might just be the best.

The composition and cutting in both Tokyo Drifter and Branded to Kill is perpetually astonishing and can be kind of dumbfounding — and not because their respective plots are mostly rendered as mere afterthoughts. Rather, it’s difficult not to be in constant thrall to the imagery and in wonderment of Suzuki’s bald-faced audacity. Every shot is in the moment, often with little concern for what came before or what is to come. It’s pure cinema at its most assaultive.

The eye-popping Tokyo Drifter features the efforts of former hit man Tetsu (Tetsuya Watari) to go straight with his retired boss. Naturally, it isn’t long before the underhanded schemes of a rival gang force him back into a life of violence, but Tetsu is no reluctant hero. Repeatedly singing his self-appointed theme song about his new life as a drifter, he evades numerous attempts on his life while leaving a trail of bodies behind him. 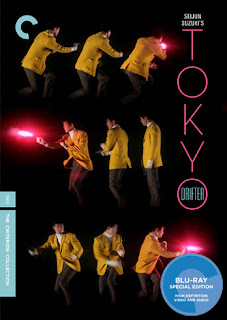 Amid the pop-art garishness of the color scheme, even the film’s black-and-white prologue pops with blown-out whites and oversaturated blacks. Suzuki often casts a room’s color in one predominant shade in a method that seems an even more excessive anticipation of Peter Greenaway’s work in The Cook, the Thief, His Wife & Her Lover. But whereas Greenaway’s formalism is accompanied by symbolic corollaries, Suzuki just seems to be going nuts. And oh how delightfully cockeyed is the result.

The jagged editing gets even more extreme in the following year’s Branded to Kill, the film that put the final nail in the coffin of Suzuki’s strained relationship with studio Nikkatsu. Shot in expressive black-and-white, the film stars Joe Shishido as Goro Hanada, the third-ranked assassin in the Japanese underworld. He has no shortage of employment, but his profession belies his inherent impotence. He needs to sniff the aroma of boiling rice to get it up, and his fragile mental state is shattered when an errant butterfly causes him to botch an important job.

The film kicks into a gear even more delirious from this point on, as Hanada must deal with a dreamy femme fatale (Annu Mari) who initiated the hit and the mysterious presence of the number one killer (Koji Nanbara), who shows himself unafraid to engage in a series of escalating mind games.

The extreme aesthetic of both Tokyo Drifter and Branded to Kill — concretely realized despite the films’ apparent chaos — make for a pair of utterly engrossing crime films. 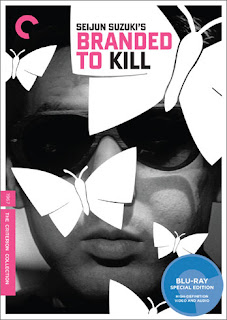 Both films are presented in 1080p high definition in their original 2.35:1 aspect ratios. Comparing these gorgeous widescreen frames to the non-anamorphic, severely muddled images of the original DVDs shows one just how far Criterion has come in the past decade. Tokyo Drifter features bold colors that pop off the screen in nearly every instance. While the image is never razor sharp, the slight softness seems inherent to the source and is likely intentional. Branded to Kill offers up an incredibly film-like image, with healthy, detail-rich grain levels. Both transfers are free of any major damage.

The uncompressed monaural audio tracks are adequate and clean, with certain effects coming off a little harsh.

Special Features
Both releases are a little thin in the extras department, although both discs feature new interviews with Suzuki, now 88, and assistant director Masami Kuzuu. Both discs also port over previously available interview excerpts with Suzuki from 1997. The Branded to Kill disc also gets a new interview with Shishido. Trailers are included with both, as are booklets with an essay by Howard Hampton for Tokyo Drifter and the inimitable Tony Rayns for Branded to Kill.

The Bottom Line
Essential upgrades. Even if the supplements are a little slight, the image quality is superb.
Posted by Dusty at 6:57 PM