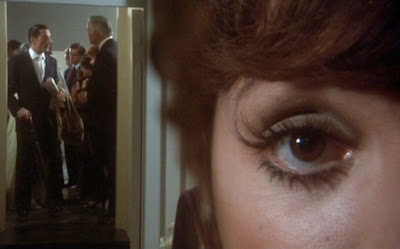 The Film
Conventional thinking states that Martin Scorsese’s New York, New York belongs in his sparsely populated “miss” column — a rare blunder sandwiched between masterpieces Taxi Driver and Raging Bull. That’s not an unfair assessment. At nearly three hours long, the film feels occasionally repetitive and self-indulgent (imagine what the original 4 ½ hour cut must have been like), and its mash-up of ’40s musical artifice and ’70s gritty improvisation isn’t fully realized aesthetically.

But New York, New York remains a fascinating film, not least because of the performances of Robert De Niro and Liza Minnelli as a match made in hell with musical talent that survives the emotional carnage. De Niro is flagrantly unlikable as jazz saxophonist Jimmy Doyle, a domineering, mercurial louse with no heart of gold hiding underneath. Minnelli is occasionally overmatched by De Niro’s adept improvisation and intense physicality, but she mostly holds her own as Francine Evans, a longsuffering woman with big dreams of her own.

The two meet on V-J Day, with the indomitable Jimmy determined to get some celebratory action. Francine rejects his advances over and over, but eventually falls in with him out of what might be pure exhaustion. Over the ensuing year, the two’s star profiles are on the rise as they perform together in an orchestra that Jimmy eventually leads, but their every interaction is fraught with the promise of some kind of explosion from Jimmy, who can manufacture a problem with ease.

Francine’s pregnancy brings Jimmy’s emotional flare-ups to an unbearable level, and much of the middle section of the film consists of overwrought screaming matches and interpersonal chaos. Interspersed throughout are a series of wonderful original songs by John Kander and Fred Ebb, but by about the two-hour mark, the film seems to have reached a breaking point.

Fortunately, it’s here where Scorsese flips the switch to something truly inspired — a flat-out homage to the MGM and Warner Bros. musicals of the ’40s with an extended film-within-a-film sequence. Francine, achieving great success, is cast as the star of a film called Happy Endings, and we see Minnelli preternaturally embody the spirit of her mother, Judy Garland. It’s a brilliantly realized sequence — less ambitious than the stylistic confluence Scorsese goes for in the early parts of the film, but far more satisfying.

New York, New York isn’t quite a work of genius, but it’s also more than a noble failure. While Scorsese would go on to synthesize the styles of his filmmaking idols with his own personal vision with greater success in later works, the sheer daring seen here made it clear a singular talent was on the rise.

The Blu-ray Disc
New York, New York is presented in 1080p high definition with an aspect ratio of 1.66:1. This is a film that really cries out for a fantastic high-def upgrade, with bold color-coding that would really benefit. Unfortunately, this is not it. Much of the transfer has a slightly dingy look, with an abundance of grain that looks like digital noise as opposed to film-like texture. The majority of shots are afflicted with a pervasive softness, with some that look even sub-DVD level. Overall, it is an improvement over the DVD, with the occasional scene (mostly those in bright light) exhibiting pleasing clarity and sharpness, but the elements used here were certainly in need of some restoration.

Audio is presented in a 5.1 DTS-HD track that fares better, presenting solid fidelity for the musical numbers and mostly clean dialogue, although there are moments where De Niro’s speech is a little muddled.

Special Features
All the extras are carried over from 2007’s 30th Anniversary DVD set, and it’s a nice collection of bonus material. Scorsese intros the film with a five-minute piece talking about his inspiration of Golden Age musicals. He even wanted to go so far as to shoot the film in Academy ratio (1.33:1) to emulate the look, but he couldn’t quite get it right. A two-part making-of features interviews from the cast and crew, with a stand-alone 25-minute interview dedicated to Liza Minnelli, who is rather delightful as she recounts growing up with famous parents and the making of the film.

About 20 minutes of deleted scenes and alternate takes are included, as well as a full-length audio commentary by Scorsese and critic Carrie Rickey. DP Laszlo Kovacs also contributes a commentary to about 10 minutes worth of scenes. The theatrical trailer and the teaser trailer round out the disc.

The Bottom Line
A better high-def transfer might’ve helped the film grow in some viewers’ estimation, but New York, New York is certainly worth taking a look at, and not just for Scorsese completists.