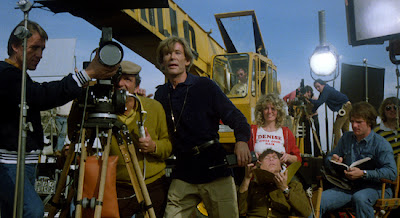 The Film
It was at a midnight screening of the admirably demented buddy cop movie Freebie and the Bean where I first became acquainted with Richard Rush, and a midnight screening seems the perfect home for his next and arguably greatest film, The Stunt Man. Looking back on it now, it’s kind of hard to believe the film was actually nominated for three Oscars (actor, director, and adapted screenplay), alongside a much more typical Academy choice, Ordinary People, which was the big winner that year. Rush is no Robert Redford — he possesses an outsider persona and subversive streak that makes The Stunt Man such a wonderfully strange film.

The film’s self-reflexivity and critical nature of moviemaking aren’t unique, and neither is its strategy of blurring the line between reality and fiction, but The Stunt Man has plenty to offer to the movies about movies subgenre. It’s as much a critique of excess conflated with art as it is a wildly entertaining genre piece in its own right. And let’s not forget it’s got one of the great Peter O’Toole performances.

Steve Railsback (both wooden and manic in equal measure) stars as Cameron, a Vietnam vet on the run from the law. During an escape from justice, he inadvertently causes the death of a stunt man working on a movie, and the film’s madman director Eli Cross (O’Toole) taps Cameron to be the new stunt man, where he can hide out from the police.

It’s not long before Cross has Cameron performing a litany of dangerous stunts, and Cameron himself is falling in love with the film’s leading lady, Nina Franklin (Barbara Hershey). Meanwhile, O’Toole’s production of the overstuffed WWI thriller is spiraling out of control and a suspicious police chief (Alex Rocco) is hanging around the set, trying to uncover the mystery surrounding the original stunt man’s disappearance.

The Stunt Man is not a polished film, wildly careening from scene to scene with an energy that occasionally seems misplaced, but the off-balance structure works to the film’s advantage more often than not. Here, emotions are heightened so often, nearly everything could be the product of an artificial Hollywood construct. O’Toole’s maestro of madness just adds to the sensation of imbalance, and as he piles undue expectations on Cameron, the film reaches its boiling point.

The Stunt Man is the kind of movie the term “cult film” was invented to describe, and this fantastic Blu-ray version will likely be a frequent guest at home midnight movie screenings.

The Blu-ray Disc
The Stunt Man is presented in 1080p high definition with an aspect ratio of 1.78:1. The film looks about as good as it was ever going to here, with a film-like grain structure that hasn’t been tampered with and strong color separation. The film was certainly a low-budget affair, and it shows here, with many of the shots possessing a distinctly dated feel. Image sharpness and clarity is never all that great, with a number of shots featuring decent foregrounds, but fuzzed-out backgrounds that are really soft. Still, damage is kept to a minimum, with just minor scratches and flecks here and there, and the transfer seems appropriate to the film’s theatrical look.

Audio is presented in a 5.1 DTS-HD Master Audio track that gets the job done, replicating the film’s explosive effects suitably across all channels and keeping the dialogue clean and clear in the fronts. There’s not a ton of surround activity going on here, but the mix is dynamic enough and doesn’t suffer clarity issues.

Special Features
Severin Films really hits it out of the park with the collection of extras they’ve assembled for this release, producing lots of new material in addition to the wealth previously available. Carried over from the original DVD release of the film are an audio commentary with Rush, O’Toole, Railsback, Hershey, Rocco and several others, as well as a feature-length documentary directed by Rush about the making of the film.

For their edition, Severin has recorded substantial new interviews with O’Toole, Hershey, Railsback, and Rocco together, each talking about their involvement with the film, which they all clearly have a deep admiration for. There’s also a new documentary on Rush’s unconventional career that features new interview footage with him. Another featurette showcases a post-screening Q&A with Rush, Hershey, and Railsback after a double feature of Freebie and the Bean and The Stunt Man at the New Beverly in Los Angeles.

The Bottom Line
Picture quality leaves a little to be desired, but there’s no question that this release of The Stunt Man does the film proud.