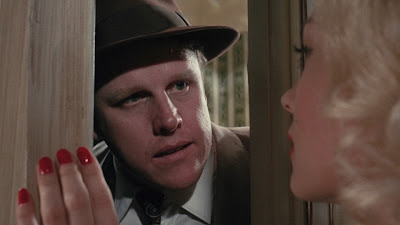 The Film
Nicolas Roeg had quite a stretch from 1970 to 1980, directing five brilliantly fractured films that feature radical editing and virtuoso camerawork. I think I’ve heard all five — Performance (co-directed with Donald Cammell), Walkabout, Don’t Look Now, The Man Who Fell To Earth and Bad Timing — described as his masterpiece. None of these claims are far-fetched. Each film is a singular work that’s as accomplished as it is bold.

Things haven’t been the same for Roeg since, with most of his post-1980 projects being met with derision or obscurity. Criterion brings one of those films to the forefront with its release of Insignificance, Roeg’s 1985 adaptation of the play by Terry Johnson. It’s a film that’s not as steadily executed as any of the aforementioned films and Roeg’s signature fragmentary flourishes aren’t as integrated as well, but it remains a fascinating work on some levels.

Probably the most obvious is the film’s “what if?” conceit — one night in 1954, people who look, sound and act just like Albert Einstein, Marilyn Monroe, Joe McCarthy and Joe DiMaggio cross paths in a New York City hotel. They’re never named, but always referred to as the Professor, the Actress, the Senator and the Ballplayer.

It’s the night of the shoot of the iconic skirt-blowing scene in Billy Wilder’s The Seven-Year Itch. The Actress (Theresa Russell) performs the scene in front of a massive crowd of onlookers and quickly thereafter escapes in a cab from the screaming throng and her enraged husband, the Ballplayer (Gary Busey).

Meanwhile, in a hotel room, the Professor (Michael Emil) is furiously working. He’s in town to speak at a peace conference, but also because of a Congressional subpoena. The Senator (Tony Curtis) shows up to encourage him to denounce communism and name names at his hearing. The Professor insists he’s not testifying at any hearing.

The crux of the film comes when the Actress visits the Professor’s hotel room, looking to have a brush with greatness. He’s blissfully unaware of who she is — which delights her — and the two spend an evening discussing his theories and tentatively flirting.

During this section, we get the film’s best scene, where the Actress giddily demonstrates the Theory of Relativity to the Professor using toy trains, balloons and flashlights, only to admit that she doesn’t really understand it; she just knows the words.

In some ways, that’s what Insignificance is like — dabbling in lots of themes (sex, the nature of celebrity, guilt, identity, death and destruction) without settling on a cohesive idea about any of them. Stylistically, the film seems more like a Roeg imitation on its surface, with the plot fragmented by flashbacks for each character, but mostly playing like a straightforward theater adaptation elsewhere.

The performances certainly help to keep things interesting — Russell teeters on the edge of parody with her version of Monroe, but mostly keeps the character grounded, while the little-seen Emil is immensely winning with his genial, slightly oblivious Einstein. Busey and Curtis meanwhile deftly balance their characters’ blustering personas with their inward impotence.

Insignificance hardly seems like essential Roeg, especially when stacked up against the previous decade’s masterpieces. Still, it’s an intriguing concept, and Roeg retains his ability to deliver scenes with punch, even if they’re more intermittent here.

The Blu-ray Disc
Insignificance is presented in 1080p high definition with an aspect ratio of 1.78:1. Considering the era in which the film was made, I was expecting an image that had problems with softness, but that’s not the case at all here. Criterion’s transfer presents an image with superb sharpness and clarity in nearly every scene. Fine details are impeccably rendered, colors are consistent if a little muted and the image possesses an intact grain structure. This isn’t one of Roeg’s more visually striking films, and the hotel room’s interiors can come across as pretty drab, but that’s certainly not the fault of this transfer, which presents every aspect of the sometimes lackluster production design flawlessly. Damage is pretty much nowhere to be found on the print.

Audio is presented in an uncompressed monaural soundtrack that’s mostly adequate. Dialogue levels are a little inconsistent, although some of the more muffled moments seem to be inherent to the film. The film’s godawful opening song (“When Your Heart Runs Out of Time” by Will Jennings) and its questionable electronic-tinged score by Stanley Myers and Hans Zimmer have impressive fidelity and sound better than they ought to.

Special Features
It’s kind of a light collection of supplements here. A new interview with Roeg and producer Jeremy Thomas covers a lot of ground, but at around only 13 minutes, the discussions of the production, the film’s themes and the theatrical roots, it all feels pretty superficial. A new interview with editor Tony Lawson runs a little longer and is more satisfying. He talks about his experiences working with Sam Peckinpah and Stanley Kubrick (his career began editing Straw Dogs and Barry Lyndon — what a one-two punch) and previous work with Roeg. The high-def clips from Bad Timing included here look great, and I hope it’s on Criterion’s radar for a Blu-ray upgrade.

Also on the disc is a 14-minute archival making-of, shot during production. Snippets of interviews with all of the principal cast are included, but it’s a little too frenetically paced for my liking. The theatrical trailer rounds out the disc.

The package includes a booklet with an essay by critic Chuck Stephens and reprinted discussion between Roeg and Johnson that originally appeared in an issue of Monthly Film Bulletin.

The Bottom Line
While the extras didn’t bring me around to a full appreciation of the film, it’s worth a curious look and its transfer here is top-notch.
Posted by Dusty at 7:37 PM