The Prisoner of Second Avenue at ACT Theatre 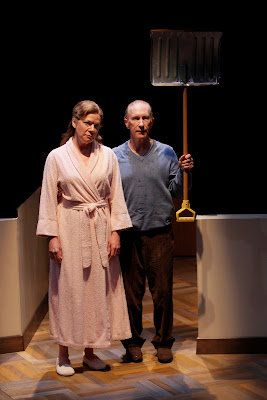 Article first published as Theater Review (Seattle): The Prisoner of Second Avenue by Neil Simon at ACT Theatre on Blogcritics.

Advertising executive Mel Edison (R. Hamilton Wright) bears the weight of it all in this Neil Simon comedy/drama, now on stage at Seattle’s ACT Theatre through May 29. Mel doesn’t hesitate to voice his opinions loudly and often about the things that bother him, and as the laundry list grows, his tenuous grip on mental stability loosens.

Simon’s 1971 play marries his trademark fast-paced wit with an at-times bleak view of American life. Prisoner is still primarily a comedy — no one’s going to confuse Simon with Arthur Miller — but it’s to Simon’s credit that he’s able to mount a feeling of overwhelming claustrophobia on the merits of his quick verbal barbs.

Credit also goes to longtime Seattle theater director Warner Shook, who keeps the staging lively and engaging in the play’s single location — the 14th floor apartment of Mel and his longsuffering wife, Edna (Anne Allgood). For Mel, the apartment isn’t a refuge from the perils of the city; it’s a microcosm of everything that’s wrong with it, from the smells to the noises to the crime that encroaches upon his home. Edna often floats the suggestion of moving away from the city, but the idea never gains any real traction, as if the two of them are trapped there by some kind of invisible barrier.

The play takes on added relevance for these times with the introduction of a round of layoffs that threatens the couple’s livelihood and only adds to the pressure Mel finds himself under. The trappings of city life may not be all that great, but is the prospect of losing everything any better?

The first act features just Mel and Edna, and both Wright and Allgood are so good, it’s kind of a shame that the second act introduces Mel’s four siblings for a scene or two. That’s not to disparage Julie Briskman, Kimberly King, Cynthia Lauren Tewes, and especially the great John Aylward, but I wouldn’t have minded seeing just Wright and Allgood spar for a nonstop two hours.

Wright has a canny ability to evoke Mel’s inner rage, which hovers right near the boiling point almost constantly. I swear I could feel my own blood pressure rising just watching him. And yet, he remains thoroughly likable in the midst of his despicable behavior, as Wright never loses sight of the human core that makes Mel’s frustrations completely understandable.

Allgood is similarly outstanding as the sympathetic wife — a character who could kind of turn into a doormat for all the concessions she makes for her raving husband, but instead comes across as strong, decent, and maybe a little more frustrated than she lets on.

Matthew Smucker’s scenic design creates a functional apartment space in ACT’s Allen theater in the round, complete with an admirable attention to detail. (Even the barely visible exterior of the front door has the apartment number on it.) A circle of period-specific TV cabinets that descend from the ceiling for several comical news interludes is a nice touch.

Deb Trout’s costume design seems a little muddled, with some pieces evoking the period perfectly (Mel’s sisters’ clothing in particular) while others are curiously anachronistic (Mel wears an obviously modern Kangol hat in one scene).

The Prisoner of Second Avenue ultimately favors a softer edge, but Simon’s play features enough bite to keep things interesting. Even if it didn’t, I’m pretty sure watching Wright and Allgood would’ve more than made up for it.