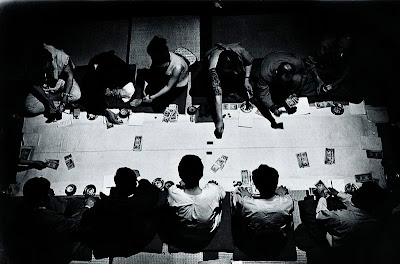 The Film
Yakuza gangster Muraki (Ryô Ikebe) gets sucked back in to a life of crime in Masahiro Shinoda’s Pale Flower and we get sucked in to, with the film’s unique rhythms and propulsive grace beckoning like sirens. Possessing the ultra-cool nature of a Melville gangster film, but with an added dreaminess that descends into nightmare, Pale Flower is an essential entry from the Japanese New Wave.

After completing a prison stint for killing a man, the reserved Muraki finds himself returning to a previous love — gambling to all hours of the night in hidden corners of the city. It’s at a game of hanafuda — an oblique game played with stiff, almost domino-like cards — where he first glimpses Saeko (Mariko Kaga), a beautiful, casually seductive woman who has no problem holding her own in the male-dominated gambling scene.

She drops large sums of money with ease and asks Muraki to introduce her to a game with higher stakes. When he does, the two are plunged into a whirlwind of illicit thrills. Though the rules to the game are never really apparent, the scenes featuring it are some of the greatest gambling moments in cinema. Shinoda gives us perspectives from all over, ranging from expansive overhead shots to intimate over-the-shoulders. The rhythmic editing is aided by Toru Takemitsu’s remarkable percussive score, which segues in and out of the film’s sound design with a slinking coolness.

Both Muraki and Saeko are characters who struggle to feel anything, and the risks associated with gambling ignite their pleasure centers in a way that nothing — even sex — can touch. A striking scene finds the two in bed together, posing as lovers in the hotel that police have raided, looking for evidence of gambling. After the cops leave, the moment presents itself, but instead, the cards are brought back out.

Trouble is, Saeko is even more deadened to the world than Muraki is, and as he finds himself falling for her, she goes in search of greater thrills. He responds instinctively to her impulsive, reckless behavior, and puts himself in the middle of danger in a mission for his mob boss.

Shinoda combines expressive noirish photography of the stillness of late-night Yokohama with jagged, quick-cut images of the bustling city during the day. As Muraki’s latent desires explode into a literal nightmare, Shinoda shows himself more than capable of bringing slightly crazed imagery into the mix as well. A stylistic marvel, Pale Flower is the work of a director eager to exhibit his unique flourishes and skilled enough to pull them all off.

The Blu-ray Disc
Pale Flower is presented in 1080p high definition with an aspect ratio of 2.35:1. The black-and-white photography looks superb here, with fantastic sharpness — especially in close-ups — and loads of fine detail. The print used here is in excellent shape, and you’ll have to look really hard to notice even the slightest instance of damage anywhere. Contrast is good, although black levels can be a little variable, with some scenes showcasing inkier blacks than others. Some shots have more of a hazy look than a sharp black-white contrast, but this may be the intended look of the film. Grain structure is intact and subtly present, but never looks like noise.

Audio is presented in a lossless monaural track that presents Takemitsu’s score beautifully. The track is quite clean, with dialogue sounding fairly natural for the most part.

Special Features
This disc is a little light on the extras, but Criterion has included a couple of solid supplements. First up is a new interview with Shinoda, where he amiably discusses the film’s production, casting — especially his choice of Ikebe, who was struggling with feelings of being washed-up — and the slightly negative reaction of screenwriter Masaru Baba, and the way the studio, Shochiku, subsequently shelved the film for a time.

The other major feature is a selected scene commentary by Peter Grilli, who looks at five sections of the film totaling about 30 minutes, and mostly discusses the score and sound design. The nearly four-minute theatrical trailer is also included. The package contains a booklet with an essay by critic Chuck Stephens.

The Bottom Line
Masahiro Shinoda may not be as well known as fellow Japanese New Wave filmmakers Nagisa Oshima or Shohei Imamura, but his altogether captivating Pale Flower makes it obvious he’s essential. Criterion’s release could’ve been a little more beefed up extras-wise, but the pristine image quality makes for a great release.
Posted by Dusty at 4:48 PM