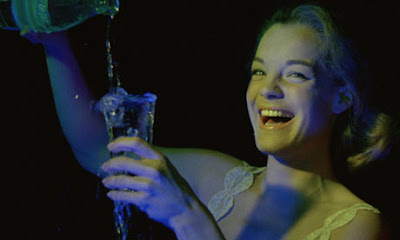 The Film
The specter of “what if” hangs over the proceedings of Henri-Georges Clouzot’s Inferno, the bewitching semi-documentary that chronicles the downfall of a film that never was. French filmmaker Clouzot had made a number of bona fide classics (Quai des Orfèvres, The Wages of Fear, Diabolique) before setting out to make L’enfer or Inferno in 1964, but this was to be a project on another level, where money wasn’t a concern and the end result would rock the world of cinema like 8 ½ did the previous year.

But only three weeks into the shoot, beset by numerous production troubles and a lead quitting, Clouzot suffered a heart attack and production grinded to a halt. About 13 hours of footage had been shot, but for the most part, it wouldn’t see the light of day until now, more than 40 years later.

Directors Serge Bromberg and Ruxandra Medrea have constructed a film that’s half re-creation and half diagnostic, examining what went wrong with the film while simultaneously giving the images that Clouzot captured — from both screen tests and actual scenes — room to dazzle. And do they ever.

Clouzot cast 42-year-old Serge Reggiani and 26-year-old Romy Schneider to play husband and wife in a small resort town. He’s stricken with fits of jealousy brought on by her flirtations with other people, causing the film’s luminous black-and-white imagery to transition into wild, bizarrely colored fantasy/nightmare sequences. Many of these exist only in the camera test realm, where Clouzot was experimenting with different textures and colors, and the expressionistic shots of the gorgeous Schneider he captured during these moments are undeniably stunning.

The film is at its best when it simply allows the unfinished fragments of film to float across the screen. Bromberg and Medrea wisely allow this footage to stand on its own, carefully weaving in interviews from the shoot’s crewmembers and re-enacted expository dialogue from two actors, but not at the expense of the spellbinding pieces of L’enfer.

There’s no telling if the film would’ve been a masterpiece or a colossal failure — as striking as the imagery is, it’s merely imaginative wisps rather than a coherent, forceful artistic vision. There’s an underlying thread passing through many of the interviews that wonders whether the finished product could’ve ever lived up to expectations. In this form, the splinters of an unrealized dream seem like kernels of buried treasure, unearthed to great awe and wonder. Perhaps it’s best this way.

The Blu-ray Disc
Henri-Georges Clouzot’s Inferno is presented in 1080p high definition with an aspect ratio of 1.85:1. Boutique label Flicker Alley has done a tremendous job with its Blu-ray debut here, presenting an image that underscores the breathtaking beauty of Clouzot’s unfinished film. The segments of Inferno are remarkably film-like, with a perfectly resolved and intact grain structure. Colors are vibrant in their blatant artificiality, almost approaching a level that seems realer than real life. Similarly, the black-and-white scenes have excellent contrast, with superb separation across the grayscale. The developed film stock had simply been sitting in cans for 40 years, so damage isn’t even a concern. The newly shot interviews and scene reconstructions appear to be shot digitally, and feature exceptional sharpness.

Audio is presented in a Dolby 5.1 mix that handles the interviews perfectly fine and provides some nice directionality with the unusual sound design that Clouzot was experimenting with, enveloping the viewer in a fortress of anxiety and paranoia.

Special Features
An hour-long behind-the-scenes featurette offers additional footage and a more traditional approach to a making-of than the film itself, which is a more elliptical making-of. A nine-minute director introduction features a very animated Bromberg (I almost felt like he was auditioning to be an infomercial pitchman) talking about how he was able to secure the assistance of Clouzot’s widow, Inès, which was not an easy proposition. An image gallery features more than 50 behind-the-scenes photos. The package also comes with a DVD of the film, which only features the Bromberg extra on it.

The Bottom Line
Whether or not Clouzot was on his way to creating a masterpiece, the images he got on celluloid are the stuff of cinematic beauty. Flicker Alley’s Blu-ray is exceptional.
Posted by Dusty at 10:34 PM