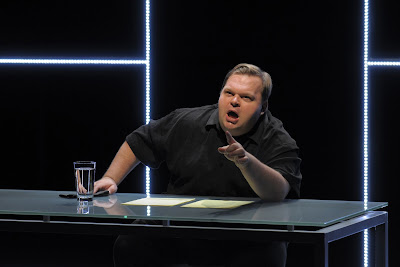 Article first published as Theater Review (Seattle): The Agony and the Ecstasy of Steve Jobs by Mike Daisey at Seattle Repertory Theatre on Blogcritics.

There’s no accusing monologist Mike Daisey of not understanding his targets in his latest piece, The Agony and the Ecstasy of Steve Jobs, now on stage at Seattle Repertory Theatre through May 22. Daisey’s precision aim locks onto the American thirst for new technology and the cult of Apple and Jobs himself, and Daisey—a self-proclaimed tech geek with a reverence for Apple products—tears down the idols in a two-hour performance that is as provocative as it is entertaining. Maybe monologist sounds too staid; how about muckraking stand-up comic?

With a chicly minimalistic stage setup—a glass-topped table in front of a simple grid of LED lights—one almost expected Jobs himself to stride onstage in a black turtleneck to announce the next iPhone. That’s not exactly what happens.

Daisey simply takes the stage, sits down in a chair behind the table, and erases any notion that oral storytelling is a lost art form. After establishing his geek credentials early on, he launches into a two-pronged story about Apple. One side traces the evolution of the company, from its humble beginnings to its current status as tech superpower, supported with plenty of well-known assertions about the mercurial Jobs. Daisey doesn’t hesitate to call him a genius; he also doesn’t hesitate to call him an asshole.

The other component of the interweaved storylines is more satisfying—it’s based on Daisey’s own gonzo journalistic discoveries rather than somewhat hidebound anecdotal information—and much more sobering. Daisey tells of his visit to Shenzhen, China’s factory district, and specifically to Foxconn, a behemoth with hundreds of thousands of factory workers making iPhones, iPods, and iPads along with products from HP, Nokia, Sony, and many other electronics companies.

Questionable Chinese labor practices are kind of common knowledge and even Foxconn itself has been subject to its share of controversy, so it’s not as if Daisey is ripping the lid off of anything.

Still, it’s likely that his vivid recounting of conversations with factory workers and their mistreatment (unpaid overtime, 70+ hour work weeks, nonexistent medical care for on-the-job injuries, rampant child labor abuse) will make most audience members confront the realities in a new, more actively uncomfortable way. As Daisey observes, how many of us have ever thought about the pairs of hands that assembled our devices before they ever made their way to us?

Daisey’s tale of pretending to be an American businessman to gain access to factories is harrowing and hilarious, and strikes the same balance that the show as a whole does. His animated, outraged bellowing sounds like a combination of John Goodman and Jeff Garlin, and just when he has you hunched over from laughter, he segues into something more thought-provoking. Friday’s audience was alternately roaring and pin-drop-silent without much room for anything in between.

The Agony and the Ecstasy of Steve Jobs is a show that demands a greater engagement with the world around us. It’s not insular in any way. Some people won’t appreciate that. Some will wonder why Daisey is picking on Apple when tons of other tech companies use the same factories (he explains it's Apple’s position as industry leader that makes it the most effective target). Some will bristle at the increasingly preachy tone the show takes in its final minutes and the handout passed out by ushers when leaving that explains options for further advocacy.

As entertaining and engaging a performer as he is, it’s pretty clear Daisey wants to be more than an impetus for a few laughs and a fun night out. He wants you to laugh at his own arcane obsessions and his blistering hate for PowerPoint. He also wants you to think about your mindset in regard to consumer culture and the costs inherent within. Like it or not, The Agony and the Ecstasy of Steve Jobs is most likely going to do both.

The show is on stage through May 22, with performances Wednesday through Sunday. Tickets are available at Seattle Rep’s website.
Posted by Dusty at 4:45 PM