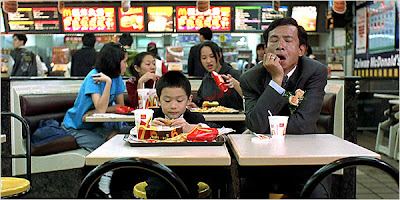 The Film
Edward Yang’s masterful final film Yi Yi (A One and a Two) transcends description in many ways. You can talk about the wonderfully realized cast of characters, the host of struggles they face, and Yang’s unimpeachable knack for making the material come alive, but even the best summary can make the film sound like just another nice “slice-of-life” feature. That severely underplays the film’s emotional resonance and its universality, which is executed ever so deftly over its nearly three-hour running time (easily one of the most effortless films of that length to watch).

Yang didn’t make a film with a distinct lesson to be learned about humanity’s common experiences, but it’s hard to imagine not being enriched by watching it. The succession of moments from a set of ordinary lives is filled with touchstones that almost every individual faces in some way — a wedding, a funeral, first love, heartbreak, regret, birth, death — and Yang approaches each with a manner both warm-hearted and clear-eyed. Like life itself, Yi Yi is familiar with the entire emotional spectrum.

The film mainly centers on the Jians, a middle-class family in Taipei, and their lives over the course of a year. Patriarch NJ (Nianzhen Wu) works for a tech firm, and is a thoughtful, if melancholy man. His wife, Min-Min (Elaine Jin), grows increasingly distant due to her mother’s (Ruyun Tang) serious illness, which has put her in a coma. 13-year-old daughter Ting-Ting (Kelly Lee) is beginning to enter womanhood and 8-year-old son Yang-Yang (Jonathan Chang) is starting to see the world in new ways.

Surrounding the family is a host of ancillary characters no less richly developed, including Min-Min’s obtuse brother A-Di (Xisheng Chen), his new wife (Shushen Xiao) and the jilted lover who keeps popping up into their lives (Xinyi Zeng).

Much of the film deals with people in transition, and the milestones (wedding, funeral, etc.) that punctuate the film act as natural turning points for each character. NJ often watches the major life decisions of the younger characters with a knowing look from afar, and he gets a chance to revisit his past when he bumps into high school sweetheart Sherry (Suyun Ke) and hesitantly pursues her again.

Yi Yi is all about maintaining perspective throughout the various stages of life and coming to terms with not being able to understand everything about the world. This is poignantly expressed by Yang-Yang, who takes to photographing the backs of people’s heads to show them what they can’t see themselves. Director Yang often frames his characters against reflective surfaces, adding another dimension to what is seen.

Yang establishes a preternaturally natural tone, and actors both experienced (Wu, giving a masterfully controlled performance, and Issey Ogata, illuminating his every scene as NJ’s Japanese business associate) and untested (Lee and Chang, both imbued with a physical grace in their first film) mesh together in a tapestry of humanity. The film’s confluence of moments is almost unspeakably beautiful. It’s one of the finest films of the ’00s.

The Blu-ray Disc
Yi Yi is presented in 1080p high definition with an aspect ratio of 1.85:1. This disc represents a subtle and pleasing improvement over Criterion’s 2006 DVD of the film, which already featured extremely impressive image quality. On the whole, the film appears slightly brighter with more natural colors and greater image clarity. There isn’t a weak spot at all in the print, and a fine layer of film grain lends the transfer a convincingly film-like image. Yang frames his characters almost exclusively in long and medium shots, and even in extreme long shots, there is an enormous amount of detail visible.

Audio is presented in a 2.0 DTS-HD Master Audio soundtrack, and the stereo mix offers nice vocal ambience throughout, with voices spread cleanly across both channels. The Mandarin (and some English) dialogue is clean and rich, and Kaili Peng’s lovely piano score fills out the mix nicely.

Special Features
Extras here are identical to those on the DVD release. Asian cinema expert Tony Rayns pairs with Yang on a commentary track, and it’s wonderful to have Yang’s thoughts on the film recorded for posterity (he died in 2007). Rayns is also featured in a breezy, but information-packed interview about the New Taiwan Cinema movement and Yang’s place within it. He considers Yi Yi to be one of the greatest accomplishments of that era.

The disc also includes the theatrical trailer (which shows just how impressive Criterion’s initial restoration was on the material) and a booklet with an essay by Kent Jones and notes by Yang from the original press kit.

The Bottom Line
Yi Yi is an essential piece of filmmaking and one of the greatest works of the 21st Century. Yang’s films are difficult to come by in this country, and the fact that his final film is easily available in such a fantastic presentation is a major blessing.
Posted by Dusty at 9:24 PM