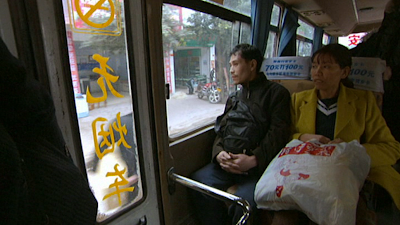 Chinese-Canadian director Lixin Fan initially sets the scope for his 2009 documentary Last Train Home incredibly wide, shooting masses of impatient, crowded people all trying to get to the same place first. Almost immediately, the film tells us that 130 million Chinese workers travel home for New Year’s — the largest human migration in the world — and the images don’t contradict it. Train stations are stuffed to the breaking point with travelers and tickets are at a premium. One gets the sense that almost any one of these people would make for a compelling story.

But then, Fan goes intimate and takes us into the lives of Changhua Zhan and Suqin Chen, a married couple working in a clothing factory in the city of Guangzhou. We find the couple finishing up their work and going to the train station each day to purchase tickets, but to no avail; they’re always sold out before they get there. Eventually, with only a few days to spare, they are able to purchase a pair at enormously inflated prices. They can finally journey home to the countryside to see their children, 17-year-old Qin and younger brother Yang, who live with their grandmother.

Last Train Home serves as both an extremely personal portrait (one that grows increasingly uncomfortable as the film progresses) and an examination of a microcosm of a large portion of Chinese society, where socioeconomic factors have driven millions to move away from their families in hopes of giving them an eventual better life.

Changhua and Suqin are adamant about seeing their children succeed in school, and their love for their son and daughter is plainly apparent. But for the kids, especially Qin, it’s almost as if these people are not her parents. After all, she only sees them a few days out of the year. In an emotionally devastating scene, she cries at a shrine to her dead grandfather and expresses her hatred of her parents.

Then she makes a decision that’s perhaps the most upsetting choice she could make to her parents — she drops out of school and moves to the city to become a factory worker as well. The film makes it clear that Changhua and Suqin don’t find it to be a fulfilling life, but they do it for the good of their children. Qin’s utter rejection of that ideal leads to several difficult moments that Fan captures with an unblinking intensity.

Last Train Home shows the work of an expert filmmaker both in its production and post-production elements. Whether shooting masses of people or just a pair; the industrial emptiness of the factory or the natural beauty of the country, Fan captures images that give the viewer a distinct sense of place, and each location feels tangible. The film is also edited with a lyrical grace that builds to moments of tension without feeling contrived. It’s both naturalistic and narratively captivating.

The DVD features about 15 minutes of extra footage, divided between scenes from the Guangzhou train station and Qin’s travel from the country to Shenzhen City. The theatrical trailer is also included as well as a booklet featuring a short interview with Fan.
Posted by Dusty at 11:14 PM