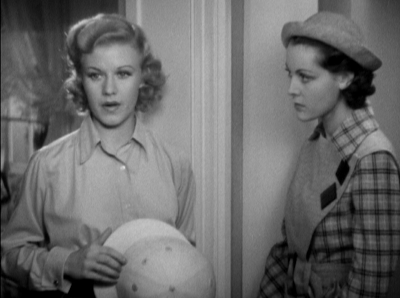 A brisk little drama that probably would’ve been better off had it indulged its comic side more, Finishing School is nonetheless an enjoyable jaunt around the halls of an exclusive women’s boarding school. The film is now available on DVD from Warner Archive.

Frances Dee stars as Virginia Radcliff, the daughter of a well-to-do New York City couple (Billie Burke, John Halliday) and the new girl at Crockett Hall, a school seemingly designed more for upper crust preparation than educational enrichment. The school’s rules are set in stone — no smoking, no drinking, no lipstick — and are presided over by the stern Miss Van Alstyne (wonderful character actress Beulah Bondi).

The demure Virginia submits to the rules without hesitance, but finds the opposite approach taken by her roommate, Cecilia “Pony” Ferris (Ginger Rogers in delightful devil-may-care mode), who wastes no time breaking out the cigarettes and booze upon their meeting. Virginia is taken aback by the blatant rule-breaking, but falls in with Pony’s way of thinking eventually.

On an excursion to Manhattan, Pony fools Miss Van Alstyne by paying a woman to pose as her aunt, and she and Virginia escape to a hotel with some friends to live it up with some guys and some drinks. It’s there that Virginia meets Ralph McFarland (Bruce Cabot), a hotel waiter who’s also an intern at the nearby hospital, and he gives her a very convincing reason to rebel against the rigid conformity of Crockett.

The first half of Finishing School follows a path familiar to any fan of 1980s American comedy, with a group of plucky students undermining a comically overbearing educational institution. Rogers is great in the ringleader role of this operation, needling her fellow students to disregard the school’s structure with potent wit.

That element of the film largely falls away by the second half, in favor of a melodramatic lovers-kept-apart storyline where Van Alstyne secretly pushes Ralph away from Virginia, and the class issues of the school and Virginia’s mother rear their ugly head. The film almost opts for a totally bonkers finale where Virginia appears ready to mentally collapse from all the pressure to be a proper woman, but it reins any notion of that in fairly quickly.

Finishing School probably would be more memorable if Rogers didn’t disappear for nearly half the movie and the comedic elements continued (or the heightened craziness was embraced at the end), but Dee makes for a winning protagonist, and at only 73 minutes, the film is never in danger of exhausting its ideas.

This release from the Warner Archive features a decent image, with pretty strong clarity and stable black levels. There are a fair amount of print scratches, but nothing egregious. The sound can be pretty rough at times, with semi-frequent hissing noticeable, but dialogue is always understandable. As per usual, this burn-on-demand disc comes without any extras.
Posted by Dusty at 2:04 PM