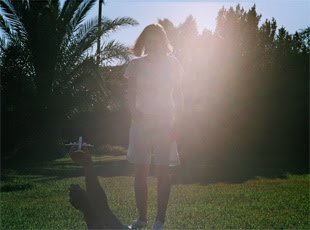 A tiny world crumbles in Dogtooth, the third feature from Greek director Giorgos Lanthimos, and a film that is filled with details both delightful and disturbing. A well-to-do businessman (Christos Stergioglou) and his submissive wife (Michele Valley) create an otherworldly home for their three children that’s governed by arbitrary conceptions of law and language. Here, the word “zombie” means a little flower, cats are vicious predators and the world beyond the confines of the driveway is absolutely off-limits, deadly even.

The three 20-some children — two daughters (Aggeliki Papoulia and Mary Tsoni) and a son (Hristos Passalis) — don’t have names, but possess unquestioning enthusiasm for the way they have been conditioned to live. No one blinks an eye when mother announces she’ll be giving birth to a baby, maybe two, and a dog. Why wouldn’t she?

Dogtooth plants a foot in worlds both surreal and banal, with totally unpredictable behavior patterns taking place against a backdrop of seeming domestic placidity. At some point, we grow accustomed to the strange rituals that populate this household — even at their cruelest and most bizarre, with sudden bursts of violence disrupting the manufactured normality. Thimios Bakatakis’s rigid photography frames each action statically against the mostly bare walls of the home, lulling us into a false sense of security similar to what the father and mother must get from so carefully controlling their children’s existence.

But the illusion is bound to disintegrate, and the father brings it about himself by introducing Christina (Anna Kalaitzidou), a security guard brought in to satisfy his son’s sexual urges, to the family. The film’s sex scenes are unblinkingly uncomfortable, with the sex itself performed as a series of passionless, stiff motions.

For the son, this seems to be enough, but Christina pushes her influence beyond him to the daughters, and the incongruous sexual behavior that results (licking body parts, erogenous or not) is only the beginning. VHS tapes find their way into the household, leading to hilariously misguided attempts to quote Rocky and Jaws, and in one riveting climactic scene, Jennifer Beals’s moves from Flashdance. This sequence stunningly illustrates the wide range of disturbance that the tightly controlled universe set these people up for, from the superficial (the effect of movies) to the fundamental (you can almost see the heretofore foreign sexuality trying to burst out of the character).

Lanthimos establishes a cool tone early on, and the film’s matter-of-factness about its characters’ perversity recalls the work of Michael Haneke, but Dogtooth is imbued with more humor than your average Haneke film. The superbly drawn script by Lanthimos and Efthymis Filippou doesn’t telegraph its intentions — some scenes are disquieting; some are darkly hilarious. Most have an element of both. Whether one finds the film to be blackly comic or persistently horrifying, the film remains a fully realized vision of each.

Kino has released Dogtooth exclusively on DVD, and it’s too bad the film isn’t getting a Blu-ray release, as its exquisite photography would really benefit. Still, this is a strong DVD presentation and the small selection of extras is solid. A 13-minute interview with Lanthimos is presented in English and details the genesis of the project, which he first envisioned as a science fiction film about the future of the family unit. Some of those touches certainly remain. Three deleted scenes are included, best of which is an alternate version of a truly inspired use of Frank Sinatra’s rendition of “Fly Me to the Moon.” The scenes run about five minutes total. The theatrical trailer and 16 film stills round out the extras.
Posted by Dusty at 2:32 PM