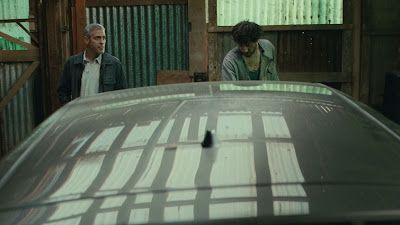 Article first published as Blu-ray Review: The American (2010) on Blogcritics.

The Film
Sometimes, you have to wonder what marketing executives are thinking. Case in point: The American, a moody, contemplative throwback to ’70s-era Antonioni and the cool minimalism of Melville, portrayed in trailers like a standard fare shoot-’em-up extravaganza. About an hour into the film, I bet there were disappointed sighs and bored glances at watches all across the cineplexes of America. I don’t think the average moviegoer in this country likes being tricked into watching an art film — even if it does star George Clooney.

Anton Corbijn’s second feature film is short on action, even if all the necessary spy thriller elements are tucked in it somewhere — violent betrayals, double-crosses, frantic shoot-outs — and long on precisely framed images, with Clooney’s assassin Jack pinned to the edge of the shot. The result is a portrait of isolation that doesn’t always seem to have much to say, but is successful even taken as a purely stylistic exercise.

After a tragically botched assignment in Sweden, Jack retreats to a small Italian village to be alone, and to complete a final assignment for unforgiving boss Pavel (Johan Leysen). He spends his time there alone in cafes, bonding with a priest (Paolo Bonacelli) and falling in love with a prostitute (Violante Placido). But the specter of violence is never far from him, as his job involves assembling a deadly rifle for fellow assassin Mathilde (Thekla Reuten).

Clooney proves that he’s one of the most interesting actors working today with a performance here that is stripped of every last shred of Clooney-esque charm. There are no smooth lines, dazzling smiles or head bobs to be found — just dour expressions and introspective stares — and he remains utterly captivating throughout.

The script, adapted from the unremarkable 1990 novel A Very Private Gentleman by Martin Booth, owes a great debt to Melville’s Le Samouraï and Corbijn’s visual style is heavily influenced by Antonioni’s The Passenger, among others, but The American doesn’t feel like just a copy of the classics. It stands on its own as an engaging slow burn tale with a haunting fatalistic tenor.

The Blu-ray Disc
The American is presented in 1080p high definition with an aspect ratio of 2.35:1. The images captured by Corbijn and cinematographer Martin Ruhe look effervescent and crisp here. The opening snow-covered landscape shots are immediately striking, with perfect image stability and excellent clarity. Earthy wood tones in the forest where Jack tests the rifle and the whitewashed, aged walls of the Italian village’s buildings show an impressive amount of fine detail. A fine layer of film grain is usually noticeable, but unobtrusive.

Audio for the film is presented in a 5.1 DTS-HD Master Audio track. The film is exceedingly quiet, with long stretches of practically no sound at all, but everything about the mix feels precise — punctuated bursts of action are cleanly represented across all channels, while dialogue remains centered and clear.

Special Features
There’s not a lot to recommend as far as bonus content goes here, with the 10-minute making-of probably being the best bet. It’s fairly standard interview material, but feels more authentic and interesting than the average press kit stuff. A commentary track by Corbijn is kind of underwhelming, with him frequently telling us what we’re seeing on screen. A handful of deleted scenes coming in at about five minutes rounds out the disc.

Also included in the set is a code to download a digital copy, and it’s heartening to see a studio just make this a download rather than creating another disc just for the digital copy.

The Bottom Line
The American is a rewarding film experience that doesn’t just end up on the generic thriller scrap heap.
Posted by Dusty at 1:36 AM