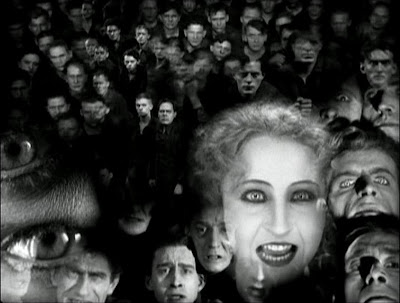 The Film
One of the most breathtaking cinematic achievements in science fiction or any other genre, Fritz Lang’s Metropolis couldn’t be seen in its original form for more than 80 years after its release. Lang’s vision of a sci-fi epic to rival the big-budget Hollywood productions of the era ironically was not well received by Paramount executives in America, who ordered nearly an hour cut from the film’s original 150-minute running time. Soon, all existing prints of the film were mangled in some way, and the 1927 premiere version seemed to be gone forever.

A 2001 restoration added some of the missing pieces back to the puzzle, but it wasn’t until a 2008 discovery of a 16mm dupe of the original release in the archives of Museo del Cine in Buenos Aires that the true Metropolis could finally begin to take shape once again. Now, with 25 missing minutes restored, the film has become a more coherent and thrilling masterpiece, and though the newly restored footage is rather severely degraded, it’s a triumph to see Lang’s complete vision.

Metropolis tells the story of a severely class-divided futuristic city, where the city’s masterminds live a lavish above-ground existence while the workers toil deep below the city in exhausting and dangerous conditions. The city is led by Joh Fredersen (Alfred Abel), but his son Freder (Gustav Fröhlich) is unaware of the societal imbalance that the city functions on the basis of. One day, he sees a beautiful woman, Maria (Brigitte Helm), with a group of working-class children. He follows her underground and discovers, to his horror, the plight of his fellow man.

Maria has foreseen the coming of a mediator between the two classes, and she believes that is Freder, but his attempts to unite the disparate groups will be countered by an evil scientist’s creation of a machine Maria doppelganger that seeks to keep division intact.

Ultimately, it’s hard to disagree with H.G. Wells’ assessment of the film as foolish, especially with its nicely pat and utterly simple-minded conclusion that posits that the heart will find a way to join the head and the hands together, but the film delivers so many striking images in rapid succession, it’s hard to care all that much.

From the painstakingly crafted cityscapes created using an intricate reflection method known as the Schufftan Process to the massively staged flooding climax (a feat that supposedly required more than 30,000 extras), Metropolis is a visual marvel. Almost every great science fiction film that followed owes some debt of gratitude to Lang’s great achievement. Seeing the restored version on the big screen earlier this year was one of the most memorable moviegoing experiences of my life.

The Blu-ray Disc
Metropolis is presented in 1080p high definition with an aspect ratio of 1.33:1. Speaking of the big screen presentation, this Kino Blu-ray effectively brings it home with a superb digital transfer that shows the film at the best it’s ever looked. The images feature excellent sharpness and clarity, with the range of blacks and whites showing excellent stability and delineation. The print still has some visible damage, but the extensive digital clean-up ensures it’s only minor stuff. The newly discovered 25 minutes is in much worse shape, with heavy scratches running throughout it, but this is the best it’s going to look having been taken from a heavily damaged 16mm dupe. The footage is still totally watchable and its addition does nothing but benefit the film.

The audio is presented in a 5.1 DTS-HD Master Audio track that features a new recording of Gottfried Huppertz’s original 1927 score. Simply put, it sounds magnificent and full-bodied here, with dynamic range and unfaltering clarity.

The film is presented with translated English intertitles rather than the original German ones. Ultimately, I don’t find this a huge deal, but there doesn’t seem a good reason not to give viewers a choice and include both.

The Blu-ray comes in a lenticular slipcover featuring machine Maria on the front.

Special Features
For a release as momentous as Metropolis, the extras are a bit thin here, but what we get is all good stuff. A 50-minute featurette explores the making of the film as well as its subsequent restorations and similar ground is covered in the booklet with noted by Bruce Bennett. A short interview with Paula Felix-Didier, curator of the Museo del Cine, features her explaining how the lost footage was found in her museum. The trailer for this 2010 re-release is also included.

The Bottom Line
Metropolis is an essential component of any serious film library, and now it can be owned in a complete and high-definition edition. Picking this up should be a no-brainer.
Posted by Dusty at 4:44 PM