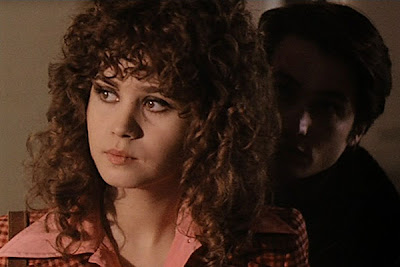 The Film
Last Tango in Paris will likely forever carry the connotation of its X (now NC-17) rating, but the film is only fleetingly about sex. The weightiness of an existential crisis occupies much more running time than “Go get the butter” moments, and it’s hard to imagine the film garnering anything more than an R today (although with those wacky MPAA folks, no one can know for sure).

Bernardo Bertolucci’s fluid tale occupies a space somewhere between dreams and waking, and it flirts with both ends of the spectrum, particularly in the character of Jeanne (Maria Schneider), a young Parisian about to be married who begins an anonymous affair with the middle-aged American Paul (Marlon Brando). Much has been made about Brando’s character, and the rough-hewn performance certainly ranks among his best, but in many ways, Jeanne is the more interesting character because her motivations aren’t as clear.

Paul is dealing with the recent suicide of his wife and his depression and anger is sublimated within the confines of the bare loft where he meets Jeanne to have sex with her. He’s the one who insists on no names and no background information. One might be tempted to think that this is an obvious male sexual fantasy where the woman must necessarily be a two-dimensional character for the story to work.

But that’s not the case with Jeanne, who Schneider plays with a disposition that suggests her once wide-eyed enthusiasm has been significantly dampened. She’s starring in a documentary of sorts for filmmaker fiancé Tom (Jean-Pierre Leaud), who retains the wide-eyed nature she does not. Bertolucci’s smoothly roving camera suggests an ethereal quality in the sequences where Tom is filming her. The scenes in the apartment provide a striking contrast in their carnality and earthiness. Brando’s Paul dispenses with euphemisms and his forthright verbal advances are more graphic than anything glimpsed on screen.

The difference between these two men in Jeanne’s life couldn’t be clearer — one is a dreamer with his head in the clouds, while the other has abandoned notions of deeper meaning for pure physical pleasure. Paul’s existential torture is made moving by Brando’s performance (especially a scene where he rails against his dead wife for her failings), but it’s the crisis of a young woman unsure of her place in the world that really makes the film tick. The recently deceased Schneider is magnificent, layering a projection of confidence upon feelings of withering self-doubt.

Last Tango in Paris is a fundamentally sad film, with loneliness and isolation present in every frame. Bertolucci creates an emotional landscape where there is little escape to be found.

The Blu-ray Disc
Last Tango in Paris is presented in 1080p high definition with an aspect ratio of 1.85:1. The transfer certainly represents an improvement over the DVD, removing print damage and generally presenting a brighter, less murky image. The presentation is never astounding, likely due to print age, but fortunately, it does retain a film-like look untouched by obtrusive digital manipulation. Medium and long shots tend to look a little soft, but close-ups show impressive amounts of facial detail. Colors are naturalistic and stable, and overall, it’s a pleasing transfer.

Audio is presented in an uncompressed mono track that can sound a little harsh in moments of shouting or loud talking, but is overall just fine, with no distracting hisses or crackles.

Special Features
The lone extra on the disc is the theatrical trailer, presented in high-def. I guess we can just be glad the film made it to Blu-ray.

The Bottom Line
An intriguing film — although not for the reasons most probably expect — Last Tango in Paris is worth the upgrade.
Posted by Dusty at 2:11 PM